As investigations into the viability of repairing its two earthquake-prone buildings continue, Napier City Council will seek community input into the future of the Civic Administration and Library buildings. 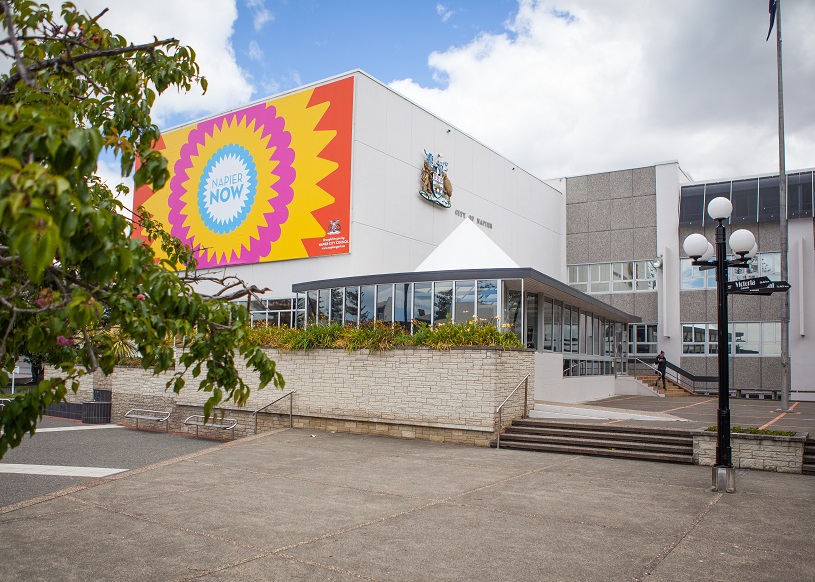 Public submissions into the future of the NCC's Civic Administration and Library buildings will open on Wednesday 4 October.

Napier City Council has today started considering how it best uses the site on which its two seismically-prone buildings sit.

Currently, the Civic Administration and Library buildings occupy a site on the corner of Station and Dalton streets in the Napier CBD. With renovations earmarked in the Long-Term Plan 2015-25, a detailed seismic assessment was ordered late last year, consistent with best practice prior to any Council-led refurbishment.

The report, undertaken by Strata Group, assessed the Civic Administration Building at 10% of New Building Standards (NBS) and the Library Building at 15% of NBS. Both buildings are currently well short of what is considered basically sound in the event of an earthquake – a minimum of 67% of NBS.

Mayor Bill Dalton says the Council is now urging members of the public to have their say on what is best for Napier – NCC taking up the two buildings, or using one building only. "Community input into this decision is, of course, vital and we look forward to hearing with Napier thinks is best for its city.”

Wayne Jack, NCC Chief Executive, says while all staff and services currently located in the two buildings will soon relocate to four alternative, temporary sites in the Napier CBD, the focus now falls on how Council best uses the earthquake prone buildings and the land on which they sit. “We occupy a large site and straddle two buildings, when all Council administrative services, including the Library, could fit into one. So Council needs to decide if we renovate or rebuild using the two buildings available, or just use one – in essence, half the site.”

A Statement of Proposal has been developed to this effect, with submissions on the matter set to open on 4 October. The statement presents the opportunity to use half the site for commercial purposes, such as retail, offices or a hotel, while NCC offices and the Library could sit on the other half.

“This approach would bring a number of benefits to Napier – economic growth for one, as well as rejuvenation of the CBD area, increased foot traffic and improved public spaces, a number of jobs, and the opportunity for a developer to create something visually and architecturally appealing here on Hastings Street.”

A library strategy, in development, is due to be completed next year and will help inform the decision on how a new or renovated library will look and feel, and what it will offer Napier.

Mayor Bill Dalton says the Council is now urging members of the public to have their say on what is best for Napier – NCC taking up the two buildings, or using one building only.

“The statement of proposal will seek formal approval from Council to divest of part of the site, for commercial development, if they see fit. Community input into this decision is, of course, vital and we look forward to hearing with Napier thinks is best for its city.”