Napier’s scenic and historic paths and walkways link neighbourhoods, trace waterways and coastline, and thread through reserves and parks. They offer walkers of all ages an escape from the bustle and hustle of the city life. Our most trekked paths and walkways are outlined below. 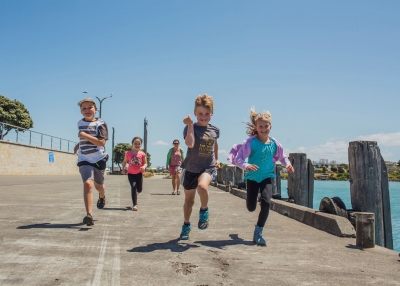 Napier has numerous walkways linking neighbourhoods, tracing waterways and coastline and threading through reserves and parks. These pleasant quiet environments offer an escape from the bustle and traffic of city life.

The information on the related pages highlights some of the most scenic and historically interesting walks. Many are one-way walks; others are linked while some provide looped routes. By using a more detailed map, you may choose an alternative way back to your starting point. For more detailed maps and information on walkways, contact Napier i-Site Visitor Centre, Marine Parade, Napier.

Encompassing the city and taking in some of the Bay's most spectacular scenery, Napier's Pathway is a great recreational asset for walkers, joggers, cyclists, baby buggies, roller bladers, wheelchairs and mobility scooters. The Pathway is very popular with locals and it is attracting growing numbers of visitors keen to take in Napier's many attractions on foot or by bike.

The Napier City Council's BIKE IT strategy was launched in 2002 with the formation of the Rotary Pathway Trust - a partnership involving the Council and the combined Rotary Clubs of Napier. The trust has been a major contributor in donating towards the cost of developing the network. The first stage was the construction of the path from Bay View to Westshore in 2003, and that was followed a year later with the Marine Parade path from Bluff Hill to Awatoto.

Easily-accessed and well-formed routes extend along the coast from Bay View to Westshore, skirt around Napier's bustling original port to the Iron Pot, track the Ahuriri foreshore, continue round Bluff Hill to the Marine Parade foreshore and head south to Awatoto. They also take in parts of the central city, flank Prebensen Drive, loop around Park Island, thread through Greenmeadows and Taradale and track waterways traversing the city.

Where possible, the Pathway has evolved to incorporate existing paths, hard beach frontages and riverbanks. Generally, the paths are a generous 2.5-3.5m wide. Well-formed, they are laid with a variety of surfacing - most often concrete but also timbered boardwalks and roading material - and are suited to all weather conditions.

The landscape - whether natural or formed - is very much part of the pleasure of the cycling and walking experience. The terrain on the Pathway is flat, and routes may include additional features such as drinking fountains, bench seating, picnic tables, signage maps and information, exercise areas and shelter. There is good lighting around Marine Parade and other high-use areas. Stopping-off points can include tourist attractions, picnic spots, public toilets, bike hire businesses, art galleries, wineries and cafes.

The Pathway meshes with the more recently established Hawke's Bay Trails - a "Great Ride" on the New Zealand Cycle Trails. This opens up access to an even wider network of routes from Bay View in the north, Puketapu, Fernhill and wine subregions on the west side of the Heretaunga Plains to as far south as Red Bridge on the Tukituki River.

Seeing the growing demand, bike hire and bike guide companies have set up to service Hawke's Bay's cycle trails. Group tours are available and cyclists hiring bikes can explore on a guided or unguided basis. Drop off and pick up are available for bikes and products bought en route.

To link off-road sections it is unavoidable that cyclists have to travel along on-road sections as well, and this is indicated by dashed lines on the particular maps.

A purpose-designed cycle shelter in downtown Napier is designed to encourage more people to cycle into and around the CBD. The recently-completed facility is dual purpose, with 19 stands holding up to 38 bicycles and bays for six motorcycles. On the corner of Dalton and Station streets, the shelter is ideally suited for library users, commuters and holiday-makers. It's also close to public transport and has built-in lights to help make it safe and secure at nights.

When the Government's proposal for a national cycleway changed into a plan to build more local recreational pathways, funding was made available to help construct a series of cycle trails in Hawke's Bay.

Led by the Hawke's Bay Regional Council, the region's territorial authorities - including the Napier City Council - have developed three major trails designed for cyclists who enjoy ranging far and wide. The Water Ride, the Landscapes Ride and the Wineries Ride link the region's activities and attractions including food, wine, architecture, the coastline and rivers.