Napier City Council is tasked with setting enforceable speed limits on roads within Napier. We aim to balance mobility and safety by ensuring speed limits are safe, appropriate and credible for the level of roadside development and the category of road for which they are set.

The 2022 Speed Limit Bylaw was adopted by Council, and changes are in effect from 1 November 2021.

Speed Limit Bylaw changes include the below locations and changes to speed. 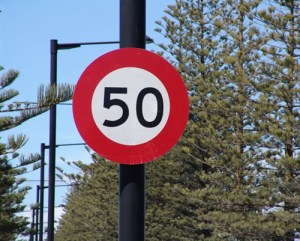 The setting of speed limits is controlled by legislation in the form of the Land Transport Rule:

Setting of Speed Limits 2003 and Amendments which establish procedures whereby road controlling authorities may set enforceable speed limits on roads within their jurisdictions. The objective of the speed limits policy is to balance the interests of mobility and safety by

ensuring speed limits are safe, appropriate and credible for the level of roadside development and the category of road for which they are set, and that consistency with other roads in the network having similar characteristics is maintained.

Frequent changes in speed limits along a route are avoided and changes should only take place at or close to a point of significant change in the roadside development or road environment like a change in road geometry, a bridge or other feature that affects speed for instance roundabouts.Speed limits are only set after following a prescribed procedure to establish the correct speed limit for a specific road, consultation with the people and organizations affected by the speed limit, notifying the Director of Transport and the Commissioner of Police, making a bylaw in this regard and erecting the necessary speed limit signs.

A speed limit must be reviewed when there is a significant change in the nature, scale or intensity of land use adjacent to a road, or in the road itself, its use or environment, and also when the Director of Transport requests a review.

A speed limit may also be reviewed if Council decides to do so or when it receives a written request to that effect from a person, organization or road user group affected by that speed limit.

Calculating a speed limit involves quite a comprehensive procedure and factors that are considered in determining a realistic speed limit include:

Urban speed limits are applied in areas where land uses include residential, commercial, industrial, educational and recreational activities and the general speed limit here is 50km/h.

Rural speed limits are set in areas mainly outside towns and cities and land uses include agriculture, market gardening, forestry, reserves and small settlements, and the general speed limit here is 100 km/h.

Speed limits of 60km/h or 80 km/h are primarily intended as limits for arterial routes, but a 50, 70 or even 100 km/h speed limit may also be appropriate on arterial roads in some circumstances. An important factor is that geometric features and general appearance of a road and surrounding development should be consistent along the entire length of the arterial route speed limit.

Permanent speed limits for roads in designated areas will apply for instance at any of the following locations:

State Highways are not controlled by the Council as they fall within the jurisdiction of the New Zealand Transport Authority.