Our crest and logoTe tohu me te waitohu

The City of Napier arms with its crest and supporters, and the NCC logo and branding you see throughout this site, represent Marine Parade's iconic Norfolk pines and the (sometimes) gently lapping waves on the foreshore. Both require written consent from Council before use. 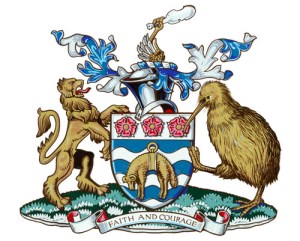 The arms of the City of Napier, together with the crest and supporters, were granted to the City in August 1951.

Use of the Coat of Arms is defined by Local Government Act 2002 (Section 234). In short you must have prior written consent of the Council before using the Crest.

In interpretation of the arms, the three red roses in the "Chief" of the shield are taken from the coat of arms of Francis Napier, 6th Lord Napier; the City of Napier was named after the 6th Lord Napier’s grandson General Sir Charles James Napier in 1858, commemorating his leadership of the British Armed Forces in India.The wavy blue bands on the shield are the accepted heraldic symbols for coastal towns and denote tourist resorts and/or ports. The golden fleece is the heraldic symbol of the wool industry of which Napier is one of the largest centres in New Zealand.

The crest depicts the inverted wing and claw of the hawk, taken from the arms of Lord Hawke, a former First Lord of the Admiralty after whom, the province of Hawke's Bay was named. In the claw of the hawk is a Māori waihaka or bone club, representative of Napier / Ahuriri's tangata whenua.

The supporters are a golden kiwi and lion representing Napier's dependence on New Zealand and England. The motto "Faith and Courage" was chosen to reflect the courage and faith present during and after the 1931 earthquake.

The current Napier City Council logo and branding was launched in September 2016 after a major re-branding project.

George Williams of Blackdog Design created the logo, which maintains some of the city’s Art Deco aspects, while taking the overarching theme of what Napier is right now - a vibrant, coastal, multi-cultural city that has taken the creativity of the past to its heart and channelled it into all sorts of fantastic culinary, viticultural, artistic, and sporting ventures.

Use of the Napier City Council Logo requires written consent of the Council before use.