These four clocks are each very unique in their style. 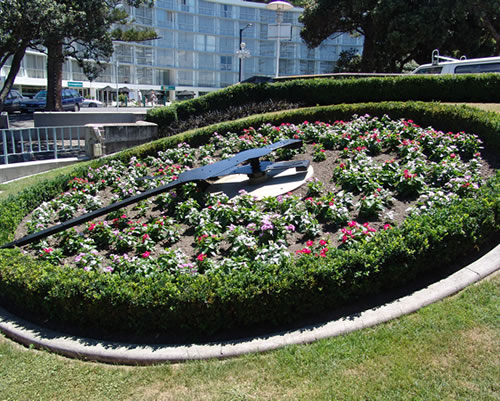 Stipulating a Marine Parade location, Mr and Mrs A. B. Hurst offered to donate a floral clock to the city in February 1954.

Mr Hurst was a member and vice-president of the Thirty Thousand Club, which supported Napier over many years by promoting the city as a visitor destination.

This floral clock is a gift to the citizens of Napier from Mr & Mrs A B Hurst Christmas 1955.

The clock was duly installed on a purpose-built site between the original baths and the Tom Parker Fountain, in front of the War Memorial Hall, then under construction and now redeveloped as the Napier War Memorial Centre.

Red and yellow carpet bedding plants were planted on the face of the clock, and dwarf begonias on its edges. To protect planting from salt-laden sea breezes, the clock was set into a sloping bank facing the street.

The clock was formally dedicated in December 1955.

In 1995, it was repositioned to accommodate changes to the forecourt of the renovated and extended conference centre. Facing the Soundshell, it provides a strong focal point for the northern end of the Marine Parade gardens.

To minimise risk of damage from vandalism, the clock automatically turns off at 6.30pm and restarts at 6.30am. 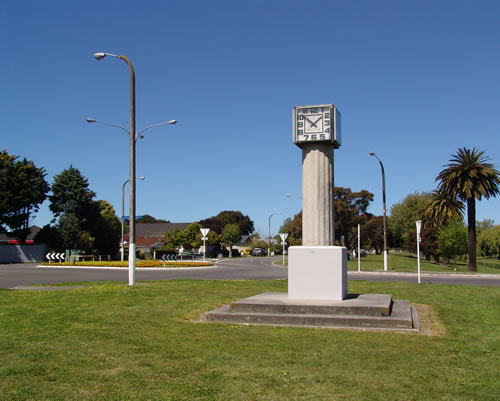 Located in Alexander Park, Marewa, this four-faced clock is supported on a fluted classical column standing on a two-step base.

A memorial honouring those who served their country in World War I, the Clock Tower is sited in a grass reserve at the Taradale end of Gloucester Street.

VJ Day 15 August 1995 The 50th Anniversary of the end of World War II 1939-1945. In tribute to all those who served New Zealand overseas and at home throughout those years and in memory of those who laid down their lives.

Napier City Council acted on the Westshore Development Association's suggestion to erect a public clock marking the Westshore approach to the city. Modernist in style, the lofty clock stands in a small garden featuring succulents on the corner of Meeanee Quay and Pandora Road.

The clock pedestal is a stylised interpretation of a ship's figurehead. Designed by then assistant superintendent of reserves David Low, it was built by council staff and dedicated in the spring of 1966.

The Keep Napier Beautiful programme worked on restoring the gardens around the clock and creating a real feature of the clock.