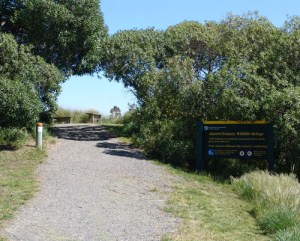 This important wetland is a sanctuary for a wide variety of wading birds including grey herons, royal spoonbills and pied stilts. Shags, kingfishers and even gannets may also be spotted diving for fish in this area.

Dogs should be kept under control.

Along the trail, information boards provide information about the history of the area, its flora and fauna and the dynamics of the habitat.

Starting from the car park at the end of Humber Street, follow the track from the information signboard down the slope and across the creek. At low tide, small crabs cautiously emerge from their holes in the exposed mud banks.

The formed track crosses an open area of grassland and winds through stands of eucalypt trees planted to screen industrial buildings on the boundary of the Estuary Reserve. Bridging a tidal drain, the route takes you up an embankment that marks the furthest extent of several land reclamations undertaken by the Hawke's Bay Harbour Board between 1931 and 1989.

The Embankment was built to provide a route across the estuary for the East Coast Main Trunk Railway. The bridge, still used by freight trains on the Napier-Gisborne trunk line, replaced a rickety wooden bridge that connected West Quay to Meeanee.

Construction started on this project in 1914 with a "toe" of rocks laid down on each side of the tidal inlet. A steam-powered dredge scooped up shingle and clay from the estuary to build up the Embankment. The concrete bowstring girder bridge was built in 1917.

Problems resulted in delays to the project, which was not finally completed until 1922.

The road declined in importance once the Pandora Road Bridge, east of the Embankment Bridge, opened in 1922. It closed to vehicle traffic in 1989.

The Embankment Bridge affords walkers good views of the estuary, including the main outfall channel to your left and the Westshore Wildlife Reserve, a significant habitat for water-loving birds.

It is sobering to think to reflect that up until the 1931 earthquake all the area to the west of the bridge, back to the foot of the Poraiti hills, was a vast tidal inlet encompassing thousands of hectares of wetland, marshes and mud banks.

Before reaching the end of the former road, follow the path, indicated by marker posts, down to the right. A boardwalk bridge leads onto the flats adjoining the tidal inlet where carved pou pou (or poutokowa) posts stand guard over the estuary.

Boardwalk sections of track cope with the inundations of spring tides. At high tide, you may need to take the bank skirting Meeanee Quay as the route back to the Pandora Road Bridge on Highway 2. Otherwise it is possible to follow the shoreline, crossing the bridge to return to the car park.

Popular with swimmers and windsurfers, Pandora Pond, the beach to the right, is also a launching point for kayaks and waka. It is named to honour the Royal Navy ship HMS Pandora, captained by Commander Drury who surveyed Hawke Bay and the Napier Roadstead in 1855.

Follow the bank above the beach, past the water sports hire centre ramp and along the Humber Street Reserve back to the walk's starting point.