Napier and its people have a proud history of honouring those who’ve passed away fighting for our freedom. ANZAC Day service turnouts are testament to this sentiment and so are our war memorial monuments, located throughout Napier as memorials of our forebears. The building and the ceremonial memorial, next to Mothers Rest across from Clive Square, were both erected in commemoration of the human sacrifices in the First World War. Later dedications honour participants in other wars. 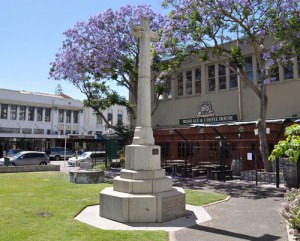 Granite column and base.

In honoured memory of all those from Hawke's Bay who served in the Great War 1914-1918. Their name liveth for evermore.

In tribute to those who served and in memory of those who gave their lives.

The memorial was unveiled on 14 June 1924 by Mr R D MacLean. It was damaged by the 1931 earthquake and restored to its present position in Hastings Street. 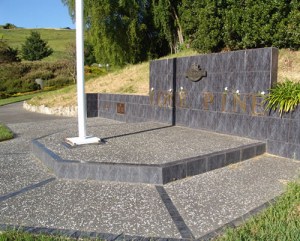 In memory of all those Hawke's Bay athletes who fell in the Great War 1914-1918 Their last great game of all.

This wall and gates were designed by J A Louis Hay, as was the "Prairie Style" pump house situated at the western end of the wall. 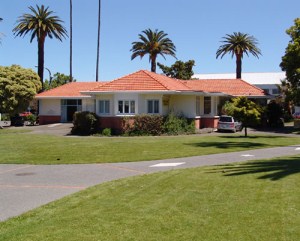 Women's Rest
Repose is the cradle of power
Erected by the people of Napier in commemoration of
this town who fell in the Great War 1914-1918.
This stone was laid on 24 October 1925 by his Excellency General Sir Charles Ferguson, Baronet; L.L.D, G.C.M.G., K.C.B, D.S.O., M.V.O.
Governor General of New Zealand. 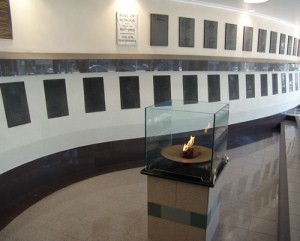 The original War Memorial Hall was built by public subscription in 1956 in memory of those who lost their lives in the Second World War conflict. It was renovated and enlarged by the Napier City Council in 1995 to continue as a living, working memorial, befitting those Napier Citizens who served and died in this century's conflicts.

Originally, the Roll of Honour included only the names of those who lost their lives in the Second World War, who resided in the Napier Borough. The City now has wider boundaries, and three additional plaques now record the names of those from the wider Napier City area, from Bay View to Meeanee and Taradale. As the city's permanent inscription of World War I losses was destroyed in the 1931 Earthquake, the new upper tier of names has been added. Another plaque records those who died in the post World War II conflicts.

This extended Roll of Honour was re-dedicated on 30th September 1995 at the facility's reopening as the War Memorial Centre, in the 50th year since the end of World War II.

The creation of this new and complete Roll of Honour was a joint project between the Napier City Council and the Napier and Taradale Returned Services Association, assisted by grant allocation from the New Zealand Remembers fund.

The bicultural dedication service was conducted by the Napier Council of Churches, attended by the Seventh Battalion (Wellington (City of Wellington's Own) and Hawke's Bay) Regiment Royal New Zealand Infantry Regiment.

Regrettably, due to the disrepair that the Hall had fallen into, the Memorial Eternal Flame was extinguished many years ago. At the rededication ceremony, the Eternal Flame was relit by Napier's oldest soldier, World War I Veteran and former Mayor, Mr E.R. (Ron) Spriggs M.B.E.

May future generations ensure that the eternal flame is never again extinguished.

VJ Day 15 August 1995 - The 50th anniversary of the end of World War II 1939-45: In tribute to all those who served New Zealand overseas and at home throughout those years and in memory of those who laid down their lives.

In grateful memory of those who died in war and those who suffer as a result of war. May our respect for all who made such sacrifices strengthen our determination to achieve a world of peace, based on peace and justice for all.

Blessed are the peace makers (Matthew 5:9) 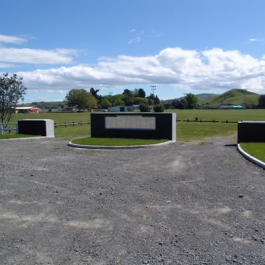 To the glory of God and in memory of those of this District who gave their lives in World Wars I & II. 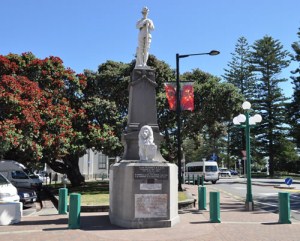 This memorial was unveiled by Lord Plunkett K.C.V.O. Governor of the Colony, 10 February 1906.

These tablets were erected by the people of Hawke's Bay to commemorate the part taken by troopers from this District in the South African War 1899-1902, and as a tribute to patriotism shown by them in offering their services in the empire's cause. This memorial was erected by the residents of this district in memory of their men and women who gave their lives in the Second World War. 1939 - 1945.

They died that we may live. 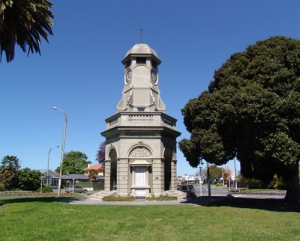 A memorial honouring those who served their country in World War I, the Clock Tower is sited in a grass reserve at the Taradale end of Gloucester Street.

VJ Day 15 August 1995 The 50th Anniversary of the end of World War II 1939-1945. In tribute to all those who served New Zealand overseas and at home throughout those years and in memory of those who laid down their lives.

The above tablet was presented by the Taradale, Greenmeadows, Meeanee Convent, Meeanee, Puketapu and Pakowhai Schools. 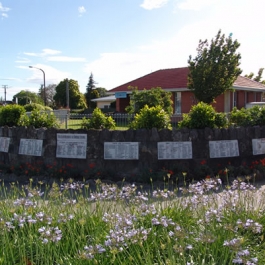 Erected by residents of Taradale District in proud and loving memory of those who gave their all. Located in the Taradale Rose Gardens.

Enter these grounds not in sorrow, but in pride try to live worthily as they died.