As of 11:59pm Wednesday 13 April, all of New Zealand is at orange of the COVID-19 Protection Framework or traffic light system Click here for more information on Life at Orange. Read more »
Keyword: #marewawalks 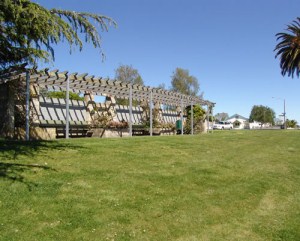 While this is one of the city's longer walk routes, it is possible for those familiar with the intervening streets to break it down into several smaller circuits.

A good starting point is from the pergola overlooking the creek by the Kennedy Road/Douglas McLean Avenue crossing. Facing east, walk to the corner and turn left onto Kennedy Road. Cross the creek and turn left again on Georges Drive. Approaching the first house, follow the footpath leading off to the left along Alexander Park.

Cross Kennedy Road at the pedestrian crossing and follow the footpath that runs parallel with Riverbend Road. At Napier Baptist Church, follow the path to the left across the creek and then right to follow the reserve. (As an option, you may continue straight on from the bridge and visit the Kennedy Park Rose Gardens.)

Cross Latham Street, taking the path onto the Latham Street Reserve and passing to the right of the brick-clad pumping station. The route continues for 1.2 kilometres to join up with Te Awa Park. Turn left at the end and follow the path along Chambers Street - you are now walking along the former course of the Tutaekuri River.

Passing Napier Boys' High School, it is interesting to reflect that pre-1931 the school buildings looked out over a wide stretch of the reed-fringed river. The footpath ends at the school.

Carry on along the reserve, crossing Nuffield Avenue. Keeping to the right bank, follow the open creek - all that remains of the river system. Higher than the left bank, this side was an embankment raised across the Ahuriri Lagoon in 1904 as part of the reclamation of Napier South.

Early in its development, it was obvious that Napier was seriously short of building land. Surrounded by marshy terrain and sea, the town was confined to the Hill and to the land south of there, now the Central Business District.

The proposal to build an embankment and reclaim the area was mooted in 1901, and work started in 1904. Using a steam-powered suction dredge, silty water was pumped from the lagoon into an enclosed area. Here the silt settled and built up to form a firm foundation.