As at 11:59pm Sunday 23 January, Napier is at red of the COVID-19 Protection Framework or traffic light system Click here for the latest information about Council facilities and services. Read more »
Keyword: #prjrotarypathway

We’re nearly there. When we finish, the 25km Rotary Pathway will encompass the city - from Esk River to Westshore, then Napier Central, Awatoto, Taradale and Poraiti, then loop back to Esk Valley.

The Rotary Pathway Trust was formed in 2002 to create combined walk and cycleways. The Pathway will encompass the city - from Esk River to Westshore, Napier Central, Awatoto, Taradale, Poraiti and looping back to the Esk Valley.

Links are also being created to the Hastings Rotary Pathway to provide access through Hawke's Bay.

Paths are generally 2.5m wide, suitable for all weather conditions and are well defined using various grades of surfacing - concrete, lime sand and roading material. The routes are landscaped to provide seating, drinking fountains, signage maps and information, exercise areas and shelter, and they are well lit around Marine Parade and other high-use areas.

This scenic route follows a bank above the beachfront between the two settlements. Walking both ways at a moderate pace takes roughly 40 minutes. This popular route can attract as many as 80 people at any one time on a fine Sunday afternoon.

New Zealand Transport Agency funded half the construction cost of the concrete path. Landscaping features include a mosaic sundial, historical information and a picnic table with bench seating.

A 6km length of Pathway opened at the end of 2004, this links up with the section from the aquarium to the Seamen's Mission at the foot of Bluff Hill. This latter section is two kilometres long and similarly follows the sweeping curve of the Hawke Bay coastline. Built by the Napier City Council, it was funded by an Eastern & Central Community Trust grant.

The Pathway snakes through the Marine Parade Foreshore Reserve, which, like the Marine Parade public gardens reserve, is a comparatively recent geological addition to the coastline. Part was reclaimed after the 1931 earthquake by depositing rubble from the devastated inner city. Most of the work has been done by the sea, however, which has extended the stable beach area an average of 70 metres east of a pre-earthquake sea wall.

A magnificent line of Norfolk pines is a Napier landmark. The trees are an emblem for many city organisations and feature on Napier's coat of arms.

Opened in May 2006, the first section of this Pathway route connects the Eastern Institute of Technology and Guppy Road. It follows the top of an existing stopbank built to contain floodwaters in the river's lower reaches.

Likewise formed from crushed limestone, a further section of Pathway opened in March 2008. It follows the course of the river down towards its mouth at Awatoto. Here, the Pathway connects up with a clip-on to the Tutaekuri River bridge on Highway 2 - the first link between the Napier and Hastings Pathways, which was completed late in 2008.

Because the 9km route adjoins farmland, walkers and cyclists may find themselves sharing the Pathway with curious and sometimes lively livestock.

A widened footpath follows the road skirting Bluff Hill, connecting the Seamen's Mission, close to the intersection of Coote Road and Marine Parade, and Spriggs Park in Ahuriri.

On the seaward side, the busy port handles Hawke's Bay exports, including shipments of apples and forestry products. Opposite, pigeons populate the ledges of Bluff Hill's limestone cliff-face.

Close to Battery Road, the Pathway links into the concrete path that leads along the seafront through Spriggs Park.

Part of this 1.3km section of Pathway winds through Spriggs Park, known as "Town Spit" in the early days of European settlement. Heading through the park, it becomes a widened boardwalk originally constructed in 1991. A line of hardy Norfolk pines defines the street-side of the park while younger trees flank the boardwalk.

The planned circumnavigation of the city will see the Rotary Pathway linking in Otatara Pa, Dolbel Reserve and Poraiti and connecting Perfume Point with Westshore, Bay View and the Esk River.

Where there is a direct safety benefit, New Zealand Transport Agency may meet up to 48 percent of the cost.

Sections included in roading construction or road upgrading projects become part of the road system. NCC funds its share as these are carried out. One such example is a cycleway marked out along Church Road. This connects up with a concrete cycling and walking path that follows Prebensen Drive through the Park Island Recreation Reserve.

Rotary input becomes vital in raising funds and in helping to determine the timing for off-road sections of the Rotary Pathway.

Napier's Rotary clubs are continuing their efforts to raise funds for this project. You, your family or your company might consider purchasing naming rights for:

Your name or your own specially designed plaque will ensure countless visitors and users of the Pathway appreciate your community involvement. 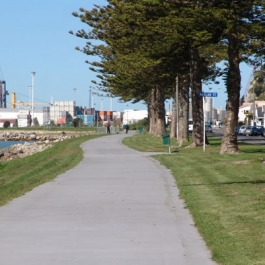 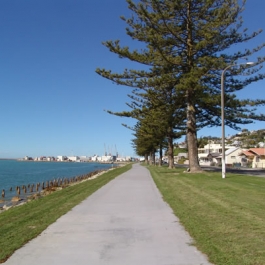 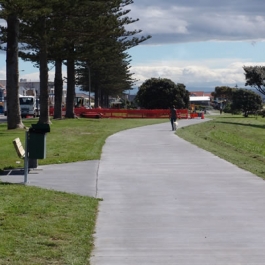 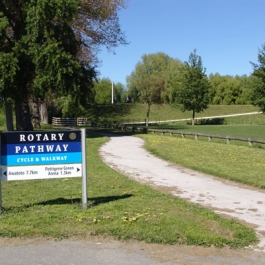