With Napier’s location and its close connection to water, it seems apt that our city boasts an impressive suite of water features. These include fountains, waterwheels and sculptures. The Tom Parker Fountain even has a light show! All are free to visit, locations and details below. 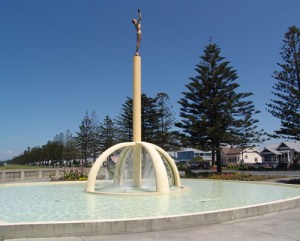 More widely known as the 'Spirit of Napier', the Gilray Fountain is among the Marine Parade's most recognised features.

The statue, fountain and decorative gardens are located on a portion of Foreshore Reserve at the southern end of the Marine Parade and are dedicated to the memory of Dr. Thomas Gilray OBE, a former Superintendent of Napier Hospital. Dr. Gilray left a bequest to the city of $9,272 which used to fund the design and casting of a unique bronze sculpture.

Hungarian born artist Frank Szirmay was inspired by characteristics of the Art Deco period and designed the naked form of an upward reaching young woman, which represents Napier rising from the ashes of the 1931 earthquake.

Following completion of the sculpture an additional donation of $5,000 was received from Sir Lew Harris which was used to erect the sculpture atop a 3.6-metre column and construct the fountain at its base. The sculpture was erected in 1971 and officially unveiled the following year.

In 1994 the Council designed and constructed the decorative gardens surrounding the fountain and sculpture.

In 2010 it was identified that the sculpture was beginning to deteriorate and was showing signs of corrosion. An investigation revealed that the original sculpture was cast from low-quality Gun Metal Bronze and that this, along with the harsh coastal environment, and the fact that when the statue was erected it was half filled with concrete, all combined to create a corrosive mixture which was eating the sculpture from the inside out.

In 2011 Council approved the recasting of a new 'Spirit of Napier' sculpture, using a high quality silicon bronze. It was identified that silicon bronze which would better withstand the harsh coastal elements, in exactly the same way as the two other bronze sculptures on the Marine Parade have (Pania and the Trawlermen).

The task of recasting the new sculpture was given to local artist Russell Evenson, who operates a foundry at Maraekakaho. On 31st August 2011 the new silicon bronze 'Spirit of Napier' sculpture was returned to her original location atop the 3.6-metre column. 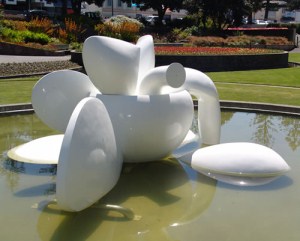 This artwork by Laurie Karasek of the Ilam School of Fine Arts, University of Canterbury, was chosen from entries in a public competition. The sculpture was paid for by a generous gift from Sir Lew and Lady Harris of Brooklands Station, Hawke's Bay.

The sculptor described the work as a bio-morphic form, floating like a giant water lily.

Installed with internal and external underwater lighting, its random sequencing produced fascinating effects after dusk. However, persistent vandalism and theft resulted in the lighting system being removed.

William Blythe was a founder of the Clive Square Improvement Society, established in 1884. For 20 years, he was a tireless advocate and financial contributor to the downtown garden's development.

When it was constructed in 1904, the fountain had an upper basin surmounted by the figure of a heron. The 1931 earthquake toppled this part of the structure, and the upper basin was restored in 1999. The fountain's water supply was turned off in 1920 and was not restored until June 1962.

Located on the southern perimeter of Clive Square, downtown Napier.

This small terracotta fountain was installed in the gardens the early years of the 20th century.

Its origins, donor and commemorative purpose remain a mystery as no reference to it has been found in council records.

In more recent years, the fountain was vandalised, resulting in the loss of its topmost levels. 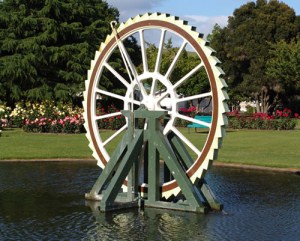 Located in Taradale's Centennial Park, between Taradale Library and Puketapu Road, this timber-built waterwheel replaces the original built for Mount St Mary Seminary before World War I. Connected to a small generator, it provided electric lighting for the brothers and priests.

Supported by a timber frame, it was placed in the park in 1970.

The Heritage Fountain (Nga Puna Wai Whakapapa) was designed and constructed by Napier artist Para Matchitt. Commissioned by the Napier City Council on 17 December 1996, it was funded by a bequest from the estate of Mabel Lea Sanderson.

Many of the fountain's various features are open to interpretation, but generally they draw on the region's features, highlighting their importance to the city and Hawke's Bay. 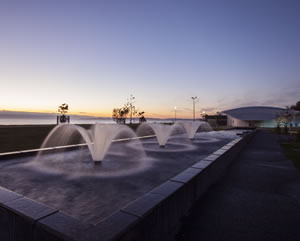 Manga Pacific is a sleek, black water feature situated on the northern side of the National Aquarium of New Zealand on Napier’s Marine Parade.

Designed by Napier architect, Graham Weaver, the water feature was officially opened in December 2013 and stretches over 50 metres of foreshore and, while the depth varies, the maximum depth is 350mm.

Titled Manga Pacific - Te toka tu moana’ which translates to ‘the rock/statue that stands steadfast by the ocean’, the feauture is made from exposed aggregate concrete and granite tiles to stand the test of time in its coastal location.

Three brass nozzles at the northern end have been designed to create a tulip-shaped fountain effect. The water then flows south through the feature towards the National Aquarium.

Manga Pacific cost $320,000 and provides a unique passive recreational area for people of all ages. It is surrounded by landscaped gardens and a few seating areas for people to sit and enjoy the beautiful surroundings.

Manga Pacific is particularly impressive at night as it is lit by three multi-coloured LED lights under the water. 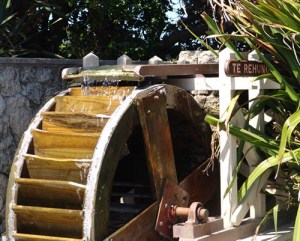 Built in 1911, the waterwheel was donated to the city by Mrs H H Phillips of Te Rehunga in Dannevirke. First used on the farm to power a milk separator and butter churn, it was subsequently harnessed for shearing, sawing wood and pumping water.

In 1915, it was coupled to a dynamo, generating electricity for the Phillips' six-roomed house for the next 15 years - seven years before authorities provided power onto the property.

In 1967, Napier Round Table moved the wheel from its original wooden bearings and it was then renovated to install in the Sunken Garden, Marine Parade. 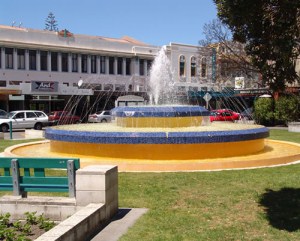 The centrepiece of a small reserve on the corner of Browning and Hastings streets, the three-tiered circular fountain offers a counterpoint to the soaring Cathedral Church of St John the Evangelist.

Bordered with flowerbeds and with bench seating placed to face the fountain, the reserve is handily placed for downtown workers and shoppers looking for a change of pace from the bustle of Napier's inner city streets.

The monumental cross commemorates VE Day. It was dedicated on 9 May 1995, the 50th anniversary of the end of World War II in Europe, as a tribute to those who served and in memory of those who gave their lives in the conflict. 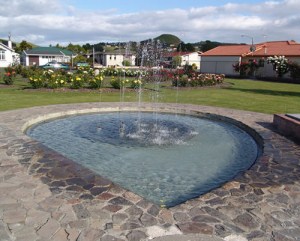 In 1972 the intersection around the Taradale Memorial Clock Tower was extensively altered with a section of road linking Peddie Street and Neeve Road being closed. The closed road section was landscaped and made into a public garden linking the Clocktower and the Memorial Rose Garden.

The Taradale Lions Club working in conjunction with Napier City Council Parks Department staff built the fountain as part of the improvement to the new reserve. 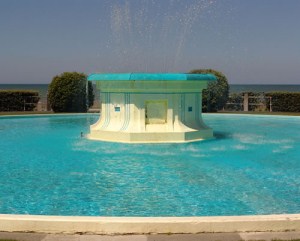 With its kaleidoscopic play of colourful lights and jets of water, this fountain is among Napier's most popular Art Deco landmarks, located in the Marine Parade Gardens, Marine Parade. It often features in period-style photo shots and video footage.

The fountain was officially opened on the night before Christmas Eve in 1936. Having gone through the Depression, locals and visitors alike were drawn to this visual treat, particularly after dusk when the coloured lights transformed the attraction into a magical sight.

Its donor was the owner of a men's outfitters shop in Hastings Street. Tom Parker was a colourful Napier character who made many gifts to worthy causes and to the city.

On one of his regular visits to Britain, he was impressed by a modern illuminated fountain in Bournemouth. Returning to Napier, he donated £1000 for a similar fountain, which was designed by Napier architect J T Watson and built on Marine Parade on an area previously occupied by a children's playground.

The fountain was powered by a General Electric Company Novalux 15 Projector electric motor imported from the USA.

When it plays, the fountain's kaleidoscopic changes of coloured lights are synchronised with the sequences of the water jets.

The council redeveloped the remaining play area north of the fountain as lawns and gardens to match those south of the water feature. Beneath this area lies the rubble of the old Napier destroyed in the 1931 earthquake.

The fountain first played at its dedication, at 8:30pm on 23 December 1936, and it has continued to do so apart from the war and immediate post-war years when it was turned on for special occasions only. The total cost of the project, including the surrounding landscaping, was almost £3,500.

Set in a pool at the northern end of the National Aquarium of New Zealand, Marine Parade, artist Alan Strathern's sculpture, dedicated to the commercial fishermen who toil at sea, came out of a curious financial story.

In 1973, the Municipal Electricity Department discovered that over many years it had overcharged for power supplied to New Zealand Cement Holdings Ltd. The financial tangle was unravelled, and the upshot was that the cement company and the power authority agreed to donate $10,000 of the overpayment to the Napier City Council to fund an artwork.

Initially, the life-like bronze was a feature of the forecourt at the Hawke's Bay Aquarium which opened in December 1976 at the southern end of the Parade. It was later relocated to its present site adjoining the aquarium when it reopened as the National Aquarium Of New Zealand in 2002.

From Invercargill, Alan Strathern graduated Diploma of Fine Arts, University of Canterbury, in 1969. He was awarded the Hansells Prize for Contemporary Sculpture in 1972.