Classified as a nationally significant Wildlife Refuge, Ahuriri Estuary supports a diverse array of flora and fauna in a variety of habitats including conservation wetlands, terrestrial wildlife, and native fish spawning areas.

During the 1931 earthquake, the former Ahuriri Lagoon was uplifted over 1.5m. Further land reclamation and drainage reduced the area to its current size of approximately 470 Ha. Te Whanganui-a-Orotū (Ahuriri Estuary) is a ‘tidal river mouth’ where the mouth of the freshwater channel connects to a shallow lagoon. The tidal exchange is approximately 495 million litres, and seawater to freshwater ratio is around 10:1. Approximately 60% of the estuary drains at low tide, exposing mud, coarse sand, and shingle intertidal habitats. 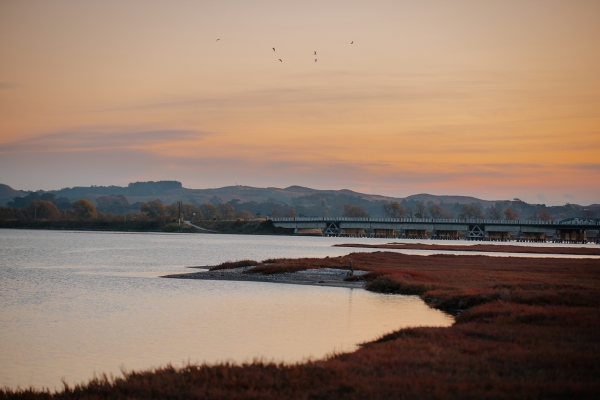 Classified as a nationally significant Wildlife Refuge, Ahuriri Estuary supports a diverse array of flora and fauna in a variety of habitats including conservation wetlands, terrestrial wildlife, and native fish spawning areas. Twenty-nine species of fish use the estuary during some component of their life cycle. Wetlands on the border of the estuary provides an important wading and breeding area for migrant bird species including the royal spoonbill and white heron.

Multiple waterways of significance feed into the Ahuriri Estuary, many of which are used as stormwater discharge streams from Napier City, and rural Hastings:

At times the water quality may not be suitable for recreational activities.

Popular with swimmers and windsurfers, the Pond is also a popular point for kayaks and waka. It was named to honour the Royal Navy ship HMS Pandora, captained by Commander Drury who surveyed Hawkes Bay and the Napier Roadstead in 1855.

The Pandora Pond lies downstream of multiple stormwater and run-off discharges, and important wetlands. At times the water quality may not be suitable for recreational activities.

We share this area with a wildlife habitat and the Ahuriri Estuary has a 14,500 hectare catchment of various industries, farmland, stormwater and drainage water from our homes, shops, workplaces, industries and roads.

To check the recreational status of Pandora Pond, click the link below to go to the ‘Can I Swim Here?’ page by Land, Air Water Aotearoa (LAWA) website.