Napier’s roading history began in the 1800s but was turned on its head after the 1931 earthquake. Land rose, the Tutaekuri River changed its course, and existing roads were destroyed. In the rebuild new roads were built to a high standard and remain so today. 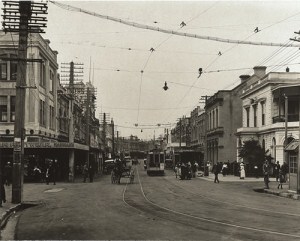 Prior to the 1931 earthquake, Napier City consisted of a town constructed on a relatively narrow shingle spit from approximately Ellison Street to Domain Road, including the hill area (Scinde Island).

The Tutaekuri River at that time ran along the western side of Georges Drive and exited to the sea via the Iron Pot and a considerable part of the developed area between the Inner City and Georges Drive had been reclaimed from former tidal marsh lands.

During the 1931 earthquake the land in and around Napier rose between one and two metres with large areas of seabed and marsh land uplifted above the high tide level.

These areas which eventually became suitable for land development, were later deeded to the Harbour Board by Act of Parliament. This gave successive Councils and Harbour Boards the opportunity to enter joint agreements to develop large greenfields areas into residential sections in Marewa, Onekawa, Pirimai, Tamatea and industrial sections in Pandora and Onekawa. Most roads in these areas were constructed to modern standards and as a result they are in first class condition and should have an indefinite life if properly maintained.

The next major expansion of the City's road network came in 1968 when the Taradale Borough was amalgamated with Napier. Approximately 7.0 kilometres of these roads still consist of rural style carriageway with low strength pavements.

Lastly, in 1974 and 1989, areas of the Hawke's Bay County were taken into the City including Greenmeadows, Meeanee to the Tutaekuri River, Bay View to the Esk River, and Poraiti. Most roads in these areas were formed to light rural standards with various pavement materials, narrow carriageways and high crowns.