In the early 'thirties the whole country was in the grip of the Depression, with many people on the East Coast of the North Island affected by falling prices for agricultural exports. This was exacerbated by summer drought conditions (McGregor, 1998). The occurrence of "New Zealand's most destructive single disaster" (Wright, 2001) was to change everything for the city of Napier, from its topography to its architecture and lifestyle (McGregor, 1998). 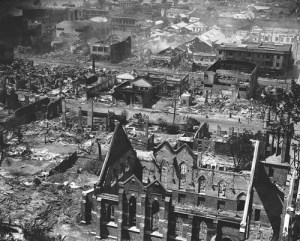 On the morning of 3 February 1931, the air 'had grown still and oppressive' and the sea was 'so calm and still' and a 'most peculiar colour', so much that everyone was talking about it (Wright, 2001). At almost 10:47a.m. the earth heaved upwards and swayed (McGregor, 1998). Energies roughly equal to the detonation of 100 million tonnes of TNT was channelled down a moving slab of landscape - a 'rupture zone' - that ran directly below Napier and southwest across the Heretaunga plains. The noise was compared to that of 'an express train' (Wright, 2001). Then, half a minute of calm and another violent shock with a downward movement, and more swaying and rocking (McGregor, 1998). Clouds of choking white powdery dust rose into the air from crumbled mortar and shattered concrete (McGregor, 1998; Wright, 2001). Two and a half minutes after the first shock it was over.

Meanwhile, fires started in two chemist shops on Hastings Street - those of W.R. Henderson and A. Hobson. From these shops the fire spread into adjoining buildings, and by mid afternoon, the town was completely ablaze. The conditions were favourable for the spread of fire in that it was a hot, fine day following a dry spell of weather. The wind had also shifted from a westerly (off-shore) to an easterly which sent the flames roaring up Hastings Street towards the Hill (H.B. - Before and After). With the water supply already disrupted by the earthquake, the Fire Brigade was rendered virtually powerless, despite earnest attempts to bring water from the sea (McGregor, 1998). Consequently, Napier's business district, from Tennyson Street to Dickens Street, was abandoned to the flames which, after destroying any remaining wooden structures, left the town looking like a bomb site (Wright, 2001).

A special reporter sent by the New Zealand Herald on the day of the earthquake reached Napier at night to find "a city of the dead, except for the glow of a land fire, and the lights of ships" (NZH quoted in Wright, 2001:83). Another witness, looking up Emerson Street the following morning, noted that all one could see "was a vast ruin, with people everywhere looking at the destruction. Fires were everywhere" (NZH 6/2/1931 quoted in Wright, 2001:77). It wasn't until that afternoon that the fires finally died out and the destruction could be assessed (McGregor, 1998). Most of the structural damage and human casualties occurred in Napier's (and Hastings) central business district. Many of the deaths were caused by fallen parapets and ornamental features as people rushed out through the doorways onto the street (McGregor, 1998). Some of the greatest tragedies occurred as a result of collapsed masonry buildings - brick being the deadliest of materials in an earthquake - resulting in many deaths inside the Nurses' Home on the Hill, the 'old people's home', and the Technical College near Clive Square where 9 pupils were killed (H.B. - Before and After).

The setting up of emergency services was greatly assisted by seamen from HMS Veronica, moored at West Quay at the time of the earthquake. Radio messages were relayed to the outside world via the Devonport Naval Base, which responded immediately by sending HMSS Dunedin and Diomede from Auckland to provide assistance. The warships brought much needed doctors, nurses, and medical equipment, as well as 54 stretchers, 5 marquees, 34 tents, 400 naval blankets, 125 seamen's beds, 200 ground sheets, 80 shovels and 31 picks. No work was too dangerous for the "bluejackets". They acted as firemen, took part in demolition work, cooked meals for refugees, were food distributors, water carriers, tractor drivers, bullion guards, policeman, searched for the dead and carried bodies to the morgues, carried out sanitation work, and even acted as nurses in the hospitals. The response was called 'a genuine triumph of organisation'. In addition to these efforts, the officers and men of the NZ Naval Squadron also made a generous donation subscribing to a special relief fund in the amount of £530 (H.B. - Before and After).

On 4 February a planned evacuation began. The Mayor of Palmerston North advised the newly formed Napier Citizens' Control Committee that his borough would house 5,000 in a relief centre. Initially, women and children were to be sent while the men were expected to stay and help out (Shaw and Hallett, 1987). The Army also arrived reaching Napier slightly before the Navy. The convoy was comprised of 4 officers and 27 men with 500 bell tents, 12,680 blankets, and equipment to set up a field kitchen able to cater for 1000 people in Nelson Park. While some Napier townsfolk were sheltering in tents on the Marine Parade beach and other open spaces (Wright, 2001), the tent town in Nelson Park served as the official evacuation centre for Napier (McGregor, 1998).

In Napier and Hastings food depots operated dispensing free meals (McGregor, 1998). Food depots were set up in Napier at Carlyle Street school; the Hastings Street school; Miss Beharrell's school on Bluff Hill; on Napier Terrace and at Ahuriri. Kitchens were set up at the Hastings Street, Marine Parade (for government officials only) and the Ahuriri Centres (Wright, 2001). Water was collected from Artesian wells in Mclean Park. Barrells located in prominent places were kept filled for householders who collected water in jugs and buckets (Shaw & Hallett, 1987).

Burials of the dead also began in both Napier and Hastings. In Napier, the 60-year-old wooden courthouse (now Department of Conservation) on Marine Parade was pressed into service as a temporary morgue (Wright, 2001). A communal burial of the Napier victims took place on Thursday 5 February at Park Island Cemetery near Greenmeadows (McGregor, 1998) and, on the following Sunday, a Dominion wide "Day of Mourning" was declared (Wright, 2001). The official toll for the Hawke's Bay earthquake was 256 dead (including 162 in Napier), 2 unaccounted for, and 400 hospitalised (McGregor, 1998).

On 17 February, a moratorium was placed on the rebuilding of any business premises until further notice, in order to allow time for the rational planning of a new CBD for Napier (McGregor, 1998). Although some businesses had already re-established themselves, there was a real concern that hasty reconstruction would result in shoddy buildings and that the urgent clearing of debris might be hindered.

A Government loan of £10,000 provided for the building of 32 temporary business premises in Clive Square and 22 professional offices in Memorial Square (Shaw and Hallett, 1987). Erected by the Fletcher Construction Company, and popularly referred to as Tin Town, the extensive corrugated iron complex opened on 16 March 1931. The Memorial Square structure incorporated the undamaged Women's Rest Rooms and almost surrounded the Cenotaph while, on Clive Square, the bandstand was likewise swallowed up (McGregor, 1998). Applications for shops far exceeded the number available so occupants were selected by ballot (Campbell, 1975). Of those who were allotted places, some were less than happy with their positioning. Another similar block, housing the Associated Banks, was built on the gardens adjacent to St Patrick's Church (McGregor, 1998). Erected "in record time", it was the first of the temporary buildings to appear in Napier after the earthquake (Campbell, 1975). 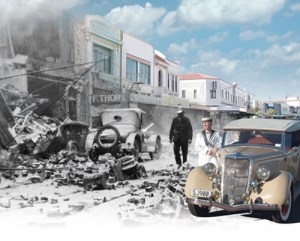 Just days before the opening of Tin Town, retired magistrate John S. Barton and retired engineer Lachlan B. Campbell, formerly of the Public Works Department, were appointed Commissioners of Napier with the task of restoring services (Wright, 2001). With Barton acting as chief administrator and town planner and Campbell in charge of engineering works, Napier would be under their control until the election of a new Borough Council on 15 May, 1933 (Campbell, 1975; McGregor, 1998).

On 8 April The Hawke's Bay Earthquake Act was passed, providing statutory assistance to the region (Wright, 2001). Only then could the task of clearing Napier begin in earnest. The act provided loans for companies (excepting national companies or those with head offices outside Hawke's Bay) and individuals, to assist them to rebuild. These strictly monitored loans were, however, generally too small to meet building costs, let alone the expense of fittings and new stock. Consequently, many businessmen, already bound by heavy pre-quake mortgages found themselves unable to rebuild (McGregor, 1998).

When the Commissioners began the restoration of the CBD, they consulted the Napier Reconstruction Committee, an organisation with representatives from local authorities, business and the professions, whose job was to investigate numerous reconstruction needs. These included:

The street widening scheme already begun in Emerson Street extended to include Tennyson, Dickens, Dalton and Market Streets, and Cathedral Lane. Small service lanes running "up the back of city blocks" (NCC 138) provided off-street loading zones and a location for "sewers and stormwater services" (ibid.). Power and telephone lines were also placed underground in a bid to improve the town's appearance (Campbell, 1975).

As all survey plans and land titles, held in the Lands and Survey Department, and owners' duplicates, held in bank vaults, had been destroyed in the earthquake / fire, a complete resurvey of Hawke's Bay was required (McGregor, 1998). Land movement in many areas had rendered survey pegs meaningless, and consequently, new regulations under the Hawke's Bay Earthquake Act were gazetted on 23 June 1932. Administered by the Lands Department, these "were designed to overcome difficulties about boundaries of properties which [had] been moved by the earthquake" (NCC, Report of Committee of Management: p.16). Within the Napier Borough it was noted that there was "no difficulty in the business area [and that] all new buildings [had] been erected on the proper places" (ibid.,17). The street with the most "outstanding example of movement" was Georges Drive (ibid.).

The first new structure to be built in the CBD was the Market Reserve Building, completed in 1931. Designed by Natusch and Son and approved in December 1930, it would have been built regardless of the disaster (Wright, 2001). Occupying the entire block between Hastings and Market Streets on the southern side of Tennyson Street, the new building was seen as "a statement of faith in Napier's future" (McGregor, 1998:40). One of its most notable features was its overhanging veranda, the first of its kind in the town. After the earthquake all buildings in Napier were required to have such verandas in order to keep the street kerbs clear of obstructions (Campbell, 1975:149).

By March 1932, nineteen new shops in Hastings Street and Tennyson Street were ready for occupation. Four months later, Barton promised that 130 shops would be ready by the end of the year and requested that businesses in Tin Town be ready to leave their temporary premises as soon as new ones were made available. The Borough Council set the ball rolling by dismantling the first row of its own buildings and shops in Memorial Square (Campbell, 1975).

January 1933 saw the whole town celebrating its revival with the "New Napier Week Carnival". Opened at McLean Park by the Governor General, Lord Bledisloe, the carnival's events included band contests, processions, race meetings and bowling tournaments (Campbell, 1975). Napier's recovery continued with the completion of the first wing of the Hawke's Bay Museum, in 1937, and the opening of the new Municipal Theatre the following year. In the years leading up to the outbreak of WWII, the Napier Thirty Thousand Club played a leading role in the development of Marine Parade, raising funds for the Sound Shell, the outer Colonnade, the skating rink and the Memorial Arches. Together with Borough Council funds, the club contributed to the Sunbay, or seaward Colonnade, where the bell of the H.M.S. Veronica was later installed.

Having been impressed by a coloured fountain in Bournemouth, menswear retailer Tom Parker donated a similar one which was completed in December 1936. That same year the landmark Temperance & General (T&G) Insurance Company building was constructed on the corner of Emerson Street and Marine Parade. As Napier's largest building it stood as a symbol, not only for the region's recovery from the earthquake but also from the great depression itself (Campbell, 1975; McGregor, 1998). 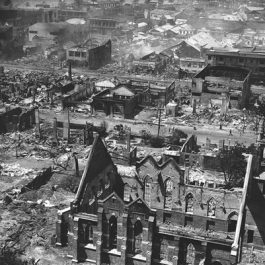 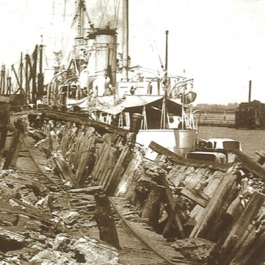 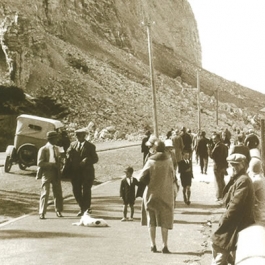 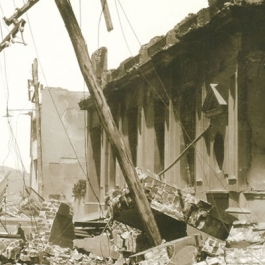 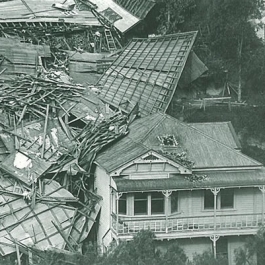 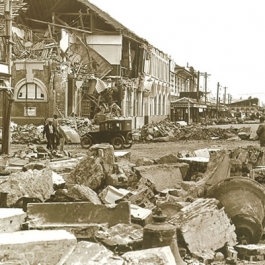 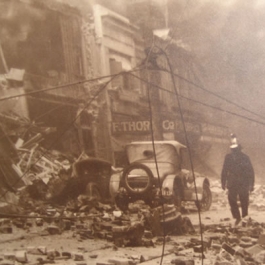 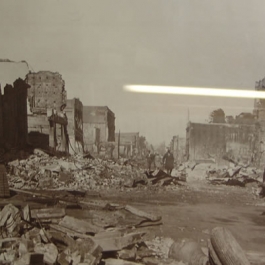