The 1931 Hawke's Bay Earthquake killed 256 people - and levelled Napier's CBD. But from the ashes arose something quite special - one of the most distinctly art deco precincts anywhere in the world. 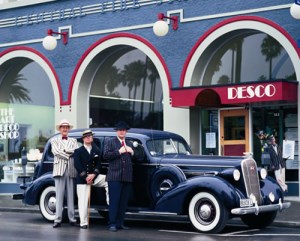 Napier is known as the Art Deco Capital of the world.

Following a massive earthquake (7.9 on the Richter scale) on the morning of Tuesday 3 February 1931, fires destroyed most of the commercial heart of Napier. The city was rebuilt in the style of that era and by the end of the decade Napier was the newest city on the globe.

Nowhere else can you see such a variety of buildings in the styles of the 1930s - Stripped Classical, Spanish Mission, and above all Art Deco, the style of the 20th Century. Napier's Art Deco is unique, with Maori motifs and the buildings of Louis Hay, admirer of the great Frank Lloyd Wright.

Napier is enhanced by palms and the angular Norfolk Island pines and bounded by fertile fruit and grape growing plains, dramatic hills and the shores of the South Pacific. In Napier, you can enjoy the legacy of its brave rebuilding and savour the spirit of the optimistic Art Deco era.

The style we now call Art Deco originated in Europe in the early years of the 20th Century, and its heyday was from 1920 to 1940. It became widely known following the great Exposition des Arts Modernes Decoratifs et Industriels, held in Paris in 1925 and from which its name was ultimately derived. By the late 1930s it was in its streamlined phase and after World War 2, the International Style, devoid of all decoration, held sway. Not until the late 1960s did people begin to rediscover it and take it seriously.

Art Deco expressed all the vigor and optimism of the roaring twenties, and the idealism and escapism of the grim thirties.

Its decorative themes are:

About the Art Deco Trust

The Art Deco Trust was formed in February 1985 in order to promote the newly published "Take a Walk Through Art Deco Napier" leaflet which had been funded by the Hawke's Bay Museum, the Ministry of Works & Development and the Napier City Council.

In June 1985 it organised the premiere of Peter Wells' television film "Newest City On The Globe". On a fine winter Sunday afternoon, a crowd of 1100 people turned out to walk the streets of Napier and view its buildings, before viewing the film in a 340-seat theatre. The public's enthusiasm encouraged those involved to continue working for the preservation, enhancement and promotion of Napier's unique architecture, constructed after the Earthquake of 1931.

The Trust was legally incorporated in 1987.

In 1992, with support from the Napier City Council, the Trust became a full-time operation with a salaried Executive Director and its own premises and shop (above) at Desco Centre, once Napier's Central Fire Station in Tennyson Street, Napier.