As of 11:59pm Wednesday 13 April, all of New Zealand is at orange of the COVID-19 Protection Framework or traffic light system Click here for more information on Life at Orange. Read more »
Keyword: #napierwarmemorialproject

The Napier War Memorial Hall was designed by Guy Natusch and was opened in Marine Parade on 14 July 1957. The stylish and innovative building incorporated a conference hall and restaurant, a Roll of Honour with a Perpetual Flame, fountain and pond. The facility has been altered on a number of occasions, firstly in 1978, then again in 1995 and most recently in 2017. The 2017 refurbishment transformed the Napier War Memorial Centre into a statae-of-the-art conferencing facility for Hawke's Bay. As a result of the upgrade, both the Roll of Honour and Perpetual Flame were removed.

In March 2021, the War Memorial Reference Group agreed to the restoration concept drawings. The approved drawings were presented to the community on 22 March 2021 before being formally adopted by Council.

The designs are now at the detailed phase, and the consenting process is underway.

Why has the floral clock been removed?

It is being restored and it will be returned to the site, at a different location, at the appropriate time.

Why is there a fence around the site?

This is for health and safety reasons – this is a work site.

How long will the project take?

We would like it to be completed by March 2023. However, as with many projects planned since the start of the COVID-19 pandemic, it may be impacted by unforeseen delays. High demand on the construction sector, and supply issues are two major factors currently impacting projects in Hawke’s Bay and throughout Aotearoa New Zealand. 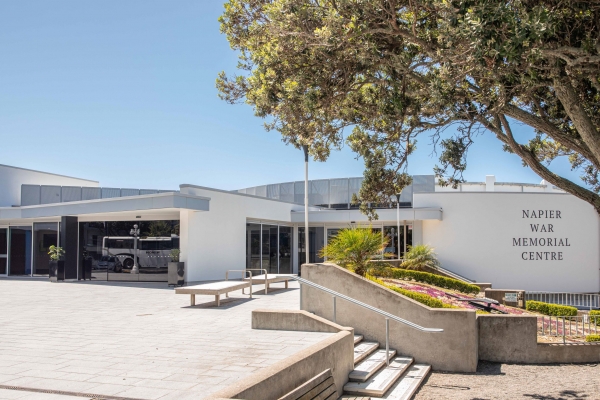