As at 11:59pm Sunday 23 January, Napier is at red of the COVID-19 Protection Framework or traffic light system Click here for the latest information about Council facilities and services. Read more »
Keyword: #ahuririwalk

Steeped in history, Ahuriri boasts a unique mix of diverse activities, from the vibrant bars and restaurants along West Quay and the village shopping centre.

From Chatham Street, facing the sea, cross Hardinge Road and turn left onto the formed walkway on the seaward side of Spriggs Park Reserve. This vantage point offers sweeping views across Hawke Bay, north to Westshore Beach, Bay View and Whirinaki. Marking the tide line, water-worn piles are the remains of the sea defence wall built by the former Hawke's Bay Provincial Council in 1876 to stabilise the beach and prevent storm surges washing over the shingle spit and flooding houses along the coastal strip.

The walkway skirts a children's play area and continues onto a generous boardwalk leading to Perfume Point. This landmark's name came about because this was where the city once discharged sewage into the bay. Formerly a petroleum storage tank depot, the land here was purchased by the Napier City Council in 1994 to add to the city's foreshore reserves. The octagonal building on the point is the starter box used by the Napier Sailing Club to oversee yacht races.

Turning south, a narrower boardwalk follows the channel to the Inner Harbour. This is the tidal connection between the Ahuriri Estuary and the sea. Before the 1931 earthquake, the Tutaekuri River - which now flows into the bay further south at Awatoto - emptied into a much larger lagoon.

The boardwalk ends at the Hawke's Bay Sport Fishing Club's boat ramp. Follow the wharf along Nelson Quay to your left. This safe haven for fishing boats and motor launches is known as the Iron Pot.

Original wharf structures are high above the waterline - a measure of the severity of the 1931 earthquake, which wrenched land upwards along Napier's coastline.

Turn right, following round the Iron Pot. On your left is the historic Customs House, built in 1904. This now houses a museum where a fascinating collection of old photographs of buildings, boats, events and characters chronicles Ahuriri's rich past as Napier's original port. One of the iron trypots used by European whalers in the early 19th century for rendering whale oil can be seen outside the Customs House.

An outstanding Maori identity, Tareha survived the massacre at the Battle of Te Pakake fought near the Iron Pot in 1824. Later recognised as one of the five principal chiefs of Heretaunga after the signing of the Treaty of Waitangi, Tareha was a central figure in the Ahuriri land purchase of November 1851 and became the first Maori Member of Parliament for Eastern Maori in the late 1860s.

Rounding the western end of Customs Quay brings you onto West Quay where the fishing fleet ties up. This is another historic site, for it was here that the small Royal Navy destroyer HMS Veronica was berthed on the fateful day of 3 February, 1931. The ship's radio operator transmitted the first report of the earthquake disaster to the outside world while the rest of the company assisted in emergency rescue work in the devastated and burning town.

On your left, former wool stores border the quay. These have found new vocations as bustling cafes, restaurants, apartments, motels and bars. Hawke's Bay's wool clip was once stored in these buildings, ready for shipping overseas.

As you walk along West Quay, the Inner Harbour broadens out into Scapa Flow with its boat moorings and marina jetties. The path curves right towards the Napier Sailing Club grounds with its launching ramps, boat and trailer parks and architecturally iconic clubhouse - the end point of the Ahuriri Walkway.

At the Customs House you can cross Bridge Street and walk south to the corner of Ossian Street to see the National Tobacco Company building. One of Napier's finest Art Deco period buildings, it is beautifully restored inside and out.

The reception area and former managing director's office are open, free to visitors Monday to Friday, 9am to 5pm.

The Pathway continues as a 290m-long boardwalk, tracking the Channel up to its mouth at Perfume Point and along the Hardinge Road beachfront. The boardwalk is four metres wide and includes timbered viewing platforms.

From Spriggs Park - another drawcard area for families - the concrete path flanks the waterline to the west entrance of the busy Napier port. The park was known as "Town Spit" in the early days of European settlement.

The Pathway continues on the hill side of Napier's busy port, which handles large shipments of containers and forestry exports and is a destination for cruise liners. Continuing beside Breakwater Road, the route takes in Bluff Hill's limestone cliff face and ends at the Seamen's Welfare Centre, opposite the Centennial Gardens on the corner of Coote Road. 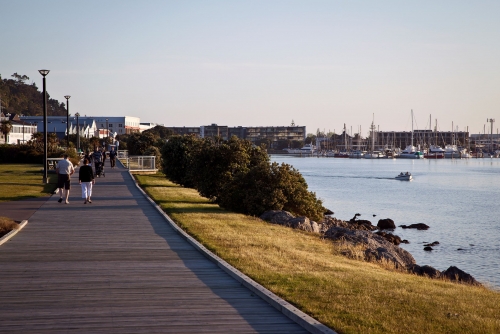