In April 2016, a three-year, $9 million extension of Napier's iWay paths began. When the project finishes in June 2019, the city will have another 36.5km of cycle lanes and off-road pathways. 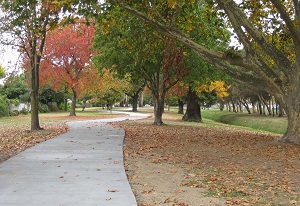 In June 2015 the Government announced it was funding new cycle facilities in Hawke’s Bay.

Thanks to $9m worth of funding, a third of it funded by Napier City Council and two thirds by NZTA, Hastings’ iWay network is being extended into Napier.

By 2019 Napier should have 36.5km of new on-road cycle lanes and off-road pathways, the latter able to be used by many others including pedestrians, dog walkers and mobility scooters.

It is an opportunity to use a series of drainage reserves through the city’s urban area to increase the number of safer and connected routes for people to cycle to school and work. More than 8000 students live within 500m of these routes.

The first two routes to be finished run alongside much of Georges Drive and through the Riverbend Road Reserve. Together they’re known as the Marewa Loop.

Starting at the Alexander Park end of Taradale Road, the Georges Drive pathway meanders through to Chambers Street, and then through Te Awa Park to link up with the Harakeke Pathway in the Nash Street Reserve. It provides excellent access to Te Awa School and Napier Boys High School from the surrounding suburbs, and from further afield.

The third route finished is the Westminster Ave pathway. It runs from the Prebensen Drive end of Orotu Drive, alongside Park Island, to York Ave, just across from Anderson Park.

There are other non-iWay pathways throughout Napier. One of the most recently built is the North Purimu pathway. This Council funded pathway runs from the northern side of Prebensen Drive on Napier City Council owned Lagoon Farm land, on to the western side of the Hawke’s Bay Expressway and past the Council pump station to join up with the Water Ride pathway at the Ahuriri estuary.

The Rotary Pathway Trust has also had something to celebrate in 2016. Te Ara O Matareta (Maggie’s Way) at Otatara Pa, Taradale, was officially opened in August. The project was founded with a generous bequest by the late Basil McCoward, and named in honour of his late wife Margaret.

For more information on the Water Ride, and the Landscapes and Wineries Rides developed collaboratively by all Hawke’s Bay’s Councils, go to the Hawke's Bay Trails page on the Hawke's Bay Regional Council website or Hawke’s Bay Tourism website.