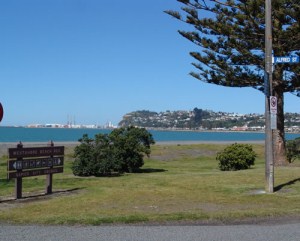 This scenic route follows a bank that overlooks the beachfront between the two coastal settlements. Walking both ways at a moderate pace takes roughly 40 minutes.

Landscaping features include ngaio bushes and recent plantings of pittosporum and pohutakawa, historical information, a mosaic sundial and a picnic table with bench seating. At the northern end, there is a concrete pillbox built as part of Hawke's Bay's coastal defences against the threat of invasion by the Japanese during World War II.

The Rotary Pathway Trust contributed to construction costs of this path, which was completed in spring 2011. It extends the Bay View to Westshore route south to where Charles Street meets James Street.

Constructing this section effectively completed a continuous coastal cycle and walkway to the city's southern boundary at the Tutaekuri River and beyond.

Westshore to the Inner Harbour Channel

Packed with striking landmarks, this section of the Pathway is among Napier's most popular. Leaving the Beach Reserve at Charles Street, follow the short length of James Street to rejoin the Pathway alongside a garden of succulents that marks the approach to Pandora Bridge. Here, there are expansive views over the inner harbour - an estuarine haven for many birds including migratory wading birds.

A short section of Pathway follows Meeanee Quay right, from Marineland Motel to The Rock Motor Lodge, where there is a facility for cyclists and walkers to cross the road. Here, a limestone track crosses grass reserve to the Embankment Road Bridge. This is the route to take for the section of Hawke's Bay Trails Water Ride that meanders across former estuary north of the Hawke's Bay Airport.

Crossing the Pandora Bridge, the Pathway route follows the Napier Sailing Club boundary from Pandora Road to emerge onto West Quay and the towering presence of carved pou - the guardian spirits which protect this historic precinct.

Continue along the wharf frontage where fishing boats tie up to unload their catches. On the opposite side of the road are former wool sheds which have new vocations as bars, cafes, offices, visitor accommodation and apartments. The formed Pathway resumes at the end of this strip of buildings, offering an elevated view of West Quay's fishing wharf - a favourite for families. On the opposite side of Customs Quay is Napier's original Customs House building.

Follow the Pathway around the Iron Pot to Bridge Street and into Nelson Quay and head then to the Napier Sport Fishing Club which faces out onto the Inner Harbour Channel.