As of 11:59pm Thursday 2 December, Napier is at orange of the COVID-19 Protection Framework or traffic light system Click here for the latest information about Council facilities and services. Read more »
Keyword: #timecapsule 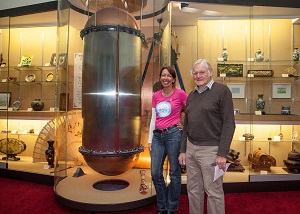 Not only is the Napier City Council Chamber the place where big decisions are made for the City, it is also the home of a time capsule not due for opening until 2074.

Made in 1974 by the then Mayor of Napier and former engineer, David Prebensen, the time capsule holds many items donated by the community, retailers and businesses of the time.

Families of babies born in the two weeks leading up to the capsule being sealed were asked to fill in a form about their children. The form included space for the babies’ footprints.

Other items include a child’s plastic ride-on trike, which were new at the time, a packet of welding rods and the town clerk’s suit and dress donated by the Mayoress.

The last thing to go inside the casing, on top of the canisters and under the top dome, was a 16mm film by the late amateur film-maker Ron Sang. The film, which was never viewed in public before it was added to the time capsule, was an edited account of the lead up to, the filling of and the official function for the sealing of the time capsule.

Mr Prebensen believes there will be enough in the capsule to hold a substantial exhibition when it’s opened.

“It’s the ordinary stuff that people used every day that will be the most interesting I think, because it’s not the sort of stuff people would keep for 100 years and back then most of it was brand new,” said Mr Prebensen.