As of 11:59pm Wednesday 13 April, all of New Zealand is at orange of the COVID-19 Protection Framework or traffic light system Click here for more information on Life at Orange. Read more »
Keyword: #councilhistory

Napier officially became a borough in 1874, the first council elections held the folllowing year. We became a city in 1950, then in 1968 merged with the good people of Taradale. 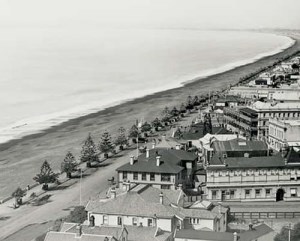 Local Maori sold the Ahuriri Block for settlement in 1851, and two years later Government Land Commissioner Donald McLean purchased the Napier town site. At this time Hawke's Bay was administered as part of the Wellington province.

In 1858, the New Provinces Act created the Hawke's Bay province and Napier became its capital.

In June 1874, provincial superintendent J D Ormond sought to make Napier self-sufficient in its finance and administration. Central Government granted Napier municipal status at the end of the year - the borough's boundaries were defined and the town divided into five districts.

In the first election, held on 18 January 1875, 493 electors were responsible for electing nine councillors from the 22 who put their names forward for council. From among their number, the successful candidates chose Robert Stuart, a former sheep farmer, as Napier's first mayor. The inaugural council meeting was on 4 February 1875.

In 1884, the Government repossessed the building which had housed the council since 1875. A new site was found fronting Tennyson Street, Herschell Street and Marine Parade and the new offices and town hall were ready for occupation in December.

Napier South, governed by an independent town board since 1908, merged with the borough in 1915. Westshore officially became part of Napier in 1942.

The 1931 earthquake temporarily shattered the structure of municipal government, and the Napier Citizens' Control Committee was established to handle the town's affairs and restore services in the aftermath of the disaster. The committee was disbanded a month later, and the council's functions and duties were then delegated to a two-man Government Commission.

The borough regained its full municipal powers in April 1933 and elections were held the following month.

Napier was proclaimed a city in 1950.

Taradale residents approved a merger with Napier City in 1968, and the official amalgamation took place on 1 April of that year.