Each of these historic sites in Napier has its own unique story to tell. 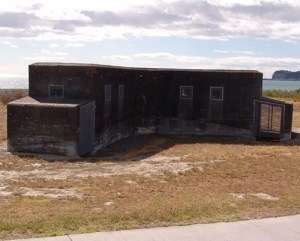 Hawke's Bay's coastal defences were strengthened to prepare for that possibility. In 1942, two 6-inch Mark 7 guns were installed in concrete emplacements on a commanding position in the Bluff Hill Domain above the port of Napier. The barracks for the 77 Battery 10 Coast Regiment NZA gunners were located behind the battery.

A plaque, set into a rock garden on the lookout, commemorates the army's presence on the site.

Concrete strong-points, commonly known as pillboxes, were also built along beaches north and south of Napier.

A good example of these gun emplacements can be seen at the Beacons Reserve, four kilometres north of the entrance to the Inner Harbour and just south of the Bay View coastal settlement. Others are located at Whakarire Avenue, Westshore, and at points on the Beach Domain south of the city. 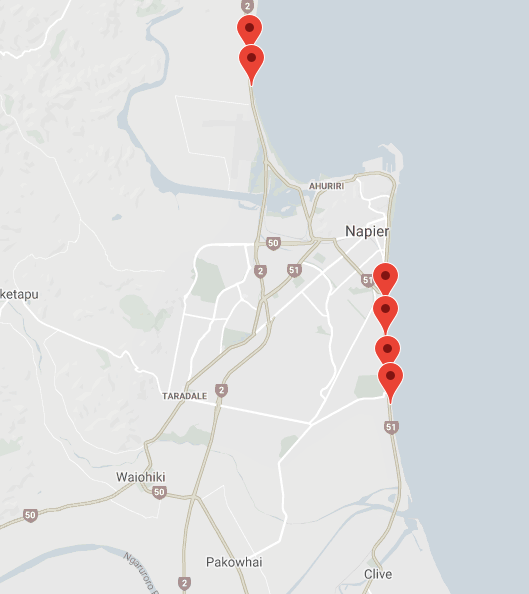 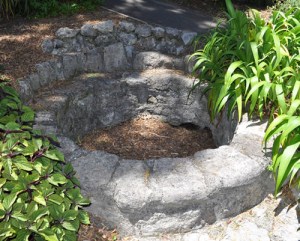 The 65th Regiment Well is in the Botanical Gardens, Napier Terrace. A detachment of the 65th Regiment was sent from Auckland in response to settlers' concerns about trouble between two local Maori chiefs. Arriving in Napier in February 1858, the troops came ashore at Onepoto Gully. Main Street now marks the route taken by the men as they made their way up Napier Hill.

A temporary camp was established until barracks were built to the north of the Botanical Gardens. The regiment located a source of fresh water at the foot of the gardens and sank two wells.

Water and other supplies were hauled up to the barracks via the Military Track, which runs between the Botanical Gardens and the Old Napier Cemetery.

Regimental laundry and other washing were done in the vicinity of the wells, and this spot was dubbed "Soapsuds Gully".

The two wells were closed later in the 19th century during a typhoid epidemic. In 1964, members of the Hawke's Bay and East Coast Arts Society and the Superintendent of Parks located the site of one of the wells. The original wooden lining of the well shaft had rotted away. In January 1965, a cosmetic well head of limestone rock was erected to preserve this historic landmark. 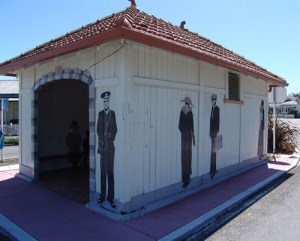 The Ahuriri Tram Shelter is on the corner of Battery and Shakespeare Roads, Ahuriri.

In 1911, the Council installed an electric tram system that linked Ahuriri and downtown Napier and provided a branch line to the railway station. The service was later extended down Browning Street to McGrath Street.

According to the timetable, the trip from the old post office on the corner of Browning Street over Napier Hill to Ahuriri took 13 minutes.

The service ended after the earthquake of 1931.

The well-preserved wooden tram shelter on the corner of Battery and Shakespeare Roads remains, however, as a reminder of this early mode of transport in the city.

The building has been painted with figures dressed in fashions reminiscent of the period. A mural of a tram inside the shelter looks most realistic viewed from Battery Road, particularly at night when the building is lit up from within.

The murals are by Brenda Morrell. The Council has also commissioned this Napier artist to paint other murals around the city. 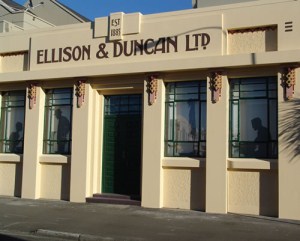 One of Napier's most admired heritage sites, this restored facade is part of the Ellison & Duncan building in Barry Street, Ahuriri.

The original building was designed by Louis Hay as part of the reconstruction of Napier following the 1931 earthquake. Distinctive Mayan-inspired patterns below the parapet "brow" are a trademark detail employed by the Napier architect, who also designed the iconic National Tobacco Company building nearby.

Occupied by wine and spirit and general merchants, the Ellison & Duncan building stood on the north side of a section of Waghorne Street in Ahuriri. The street was subsequently closed, and the building was then used as part of a road transport and warehouse facility.

Although the building was demolished to make way for a house development, a cooperative effort by the developers and the Napier City Council resulted in the facade being relocated to Barry Street in 1993. Here, it backs onto an apartment building, effectively forming part of the boundary wall for the residential complex.

The significant restoration project involved replacing flashings, sandblasting and re-rendering surfaces, adding glazing tiles that were part of the original detailing and repainting the original colour scheme using paint fragments as a guide. Built in Latham Street in 1931, the pump station backing onto McLean Park was threatened with demolition when the Napier City Council decided to retire a well providing poor quality water.

There were concerns that the pump house might fall short of modern earthquake standards, but after experts gave it the all-clear it was refitted as a high tech booster pumping station regulating water between the two Napier Hill reservoirs.

The building was designed by leading Napier architect Louis Hay and is inspired by the strong linear forms of American architect Frank Lloyd Wright's "prairie style".

The paint scheme, featuring the building's original earthy colours of brown and blue, is based on remnants scraped off the walls.

Hay's trademark tile details, in this case applied to the parapet corners, have been polished clean to reveal the original red finish.

In 1999, the Council's restoration of the building attracted the "supreme" accolade in the Art Deco Trust's annual awards.

NCC, Heritage - and our archaeological obligations

We value our city’s archaeology and are committed to meeting our legal obligations under the Pouhere Taonga Heritage New Zealand Act 2014. To ensure NCC's minor road works within the city centre don’t destroy any archaeological remains, we've been granted a Global Archaeological Authority. This Authority and its accompanying Management Plan (673 KB), set out the areas of high to low risk in the city and provides appropriate management practices for each of these areas. Historic Site. This plaque marks the site of the first community stopbank in 1877, to protect the residents of Taradale from the floodwaters of the Tutaekuri River. 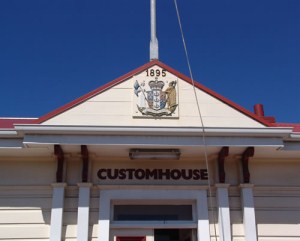 The Customhouse facing out to the Iron Pot area of Napier's Inner Harbour served the Napier from 1895 to 1953 when the department was moved into the city. Subsequently, several Government departments used the building.

Later, because of its age and poor state of repair, the Customhouse was threatened with demolition. The Hawke's Bay Harbour Board stepped in, purchasing the building and overseeing its restoration.

In August 1989, the Harbour Board set up a trust to administer the building and the Customhouse was presented to the citizens of Napier and Hawke's Bay for use as a meeting place and future maritime museum.

The building is not the city's original customhouse. After Napier was declared a customs point of entry in 1855, a combined customhouse/post office was erected on the corner of Milton and Battery Roads.

The iron try-pot near the Customhouse is typical of those used by whalers for trying out (melting down) blubber. The resultant oil was poured into casks while waste from the cooking process was used to stoke up the fire beneath the try-pot.

Several small whaling stations operated along Hawke's Bay's coastline during the 1880s. These were strategically located to spot and capture whales on their migratory paths. 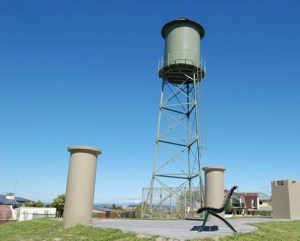 The Council has landscaped the commanding site, which offers a view southeast to Cape Kidnappers, with paving, a bench seat, grassed areas and planting.

Visitors to this historic location climb up a flight of steps onto the original reservoir which, built in 1890, is dug into a grassed mound. No longer used, it held 1.5 millions litres of water.

The water tower, originally erected in 1910, has been preserved as a distinctive landmark. Toppled in the 1931 earthquake, it was rebuilt by J.J. Niven and Co.

With a capacity of 34,000 litres, it provided water pressure for Bluff Hill houses until 1988.

The rectangular concrete tank was built in 1908. It has a capacity of 1.4 million litres and is still used to supply water to Bluff Hill homes. Built between 1931-33, the round tank can hold 5.7 million litres.

These storage tanks are part of the water pressure system for Napier Hill. Napier's water reticulation draws from a massive aquifer located under the Heretaunga Plains. 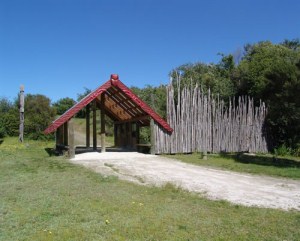 Located on a commanding hill site south of Taradale, Ōtātara Pā is among New Zealand's most important archaeological sites.

Providing an insight into the area's Māori history, the original Ōtātara and Hikurangi Pā sites are embraced in the 33-hectare historic reserve formed 25 years ago. Kaitiaki (caretakers) of Ōtātara, Ngāti Pārau of Waiohiki have partnered up with the Department of Conservation in developing and managing the reserve.

Māori occupied the knoll as long ago as the late 15th century, and it was here that the first Ngāti Kahungunu descendants gained a foothold in Heretaunga and intermarried to become the dominant iwi in Hawke's Bay and the Wairarapa.

Following the hilly track, walkers can appreciate the site's natural defensive qualities. Standing sentinel over the Heretaunga Plains to the south, both pā were protected from attack by cliffs, steep spurs and a steep drop to the Tutaekurī River.

Originally Te Whanganui-a-Orotū - the large tidal lagoon which was reduced by land uplift in the 1931 earthquake - extended as far south as Ōtātara. Over the centuries, the lagoon silted up at its southern end, but the river provided continued access to the estuary's kaimoana - shellfish, eels and fish.

The remains of terrracing and house and food pits can still be seen. Restoration work has included tree planting, palisades and pouwhenua, the carved posts symbolising the connection to ancient ancestors and the land.

A loop track starts from Springfield Road car park, or set off from the end of Churchill Drive for a slightly longer walk. Interpretation panels have been set up at points of interest along the tracks, which offer views over a wide area.

Māori custom prohibits kai (food) at wahi tapu (sacred places) such as this.