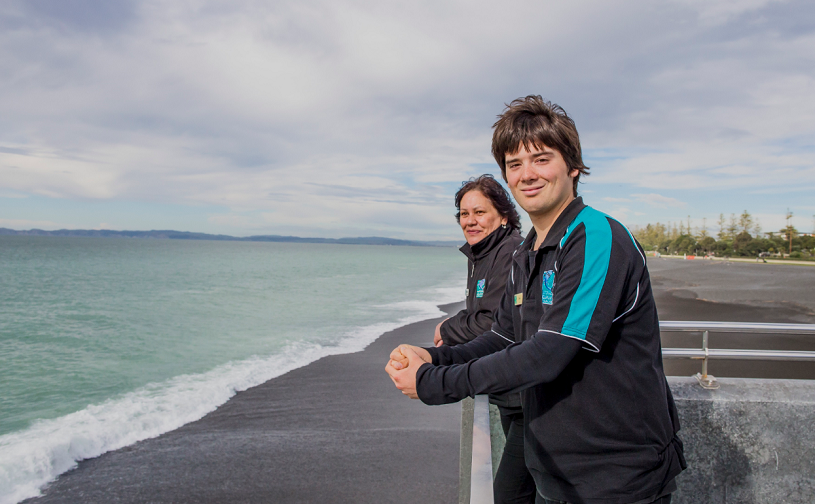 Napier’s Marine Parade has been the setting of earthquakes, aquariums, legends, murals and just off its stony shore - a secretive U-boat mission.

These stories are set to be shared at the beginning of Te Wiki O Te Reo Maori (Maori Language Week).

First designed in the 1880s to mimic the promenades of English seaside towns, Napier’s waterfront has been the site of many and varied activities and attractions, such as public baths, skating competitions, and on a certain day in 1931 (the day of the Hawke’s Bay earthquake), a rapidly retreating sea. “Many landmarks of Napier were made around the pre-earthquake estuary. Even the wooden beacons near Hawke’s Bay Airport were used to guide ships into the much larger, pre-earthquake estuary,” says Jake.

National Aquarium's Jake Brookie: "Te Reo is a truly living language. Place names around Ahuriri have a direct link to our history, something I'm eager to share."

The 45-minute long walks – free to locals – will begin at the i-SITE and take in the historic seawall by MTG Hawke’s Bay, the viewing platform covering the Marine Parade stormwater outfall, and the commanding Seawalls: Murals for Oceans mural on the exterior of the National Aquarium.

“Napier has a wonderful connection to the sea and this connection goes back centuries,” says Brenda.

Along the way, walkers will be encouraged to learn how to introduce themselves in Te Reo.

Jake is also excited to be hosting the walks, and is taking part in a Te Wananga O Aotearoa Maori language course, as well as Te Reo training offered by Napier City Council. “Te Reo is a truly living language. Place names around Ahuriri have a direct link to our history, something I'm eager to share,” he says.

The walks will later be part of a National Aquarium experience offered to the many tour groups visiting Napier this coming summer season. “We have had a great response from international tourists when we have mentioned this new tour and we are really excited to add it to our customer offerings,” says Rob Yarrall, Manager National Aquarium.

Depending on interest, the free walks for locals may be repeated during future Maori Language Weeks.

Places on the walks are limited to 15 - bookings are essential. Contact the National Aquarium of NZ on (06) 834 1404 or email Jake Brookie, jakeb@nationalaquarium.co.nz