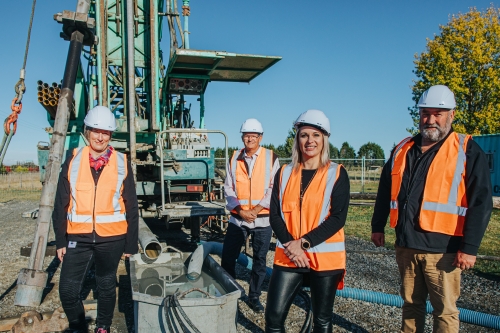 A site in Meeanee has the potential to become a new main water source for Napier and ease the city’s dirty water issues.

Dirty water issues have been linked to water with higher manganese levels, which oxidises when combined with chlorine to create dirty water. Napier’s two key bores that source much of the city’s water supply have higher manganese levels and replacing these with new low manganese bores has the potential to improve the water clarity for affected Napier residents.

”As a Council we have committed to water being our number one priority, and I am pleased that we are able to break ground on this project,” says Napier Mayor Kirsten Wise.

Hawke’s Bay company Honnor Drilling, contracted by Napier City Council, started drilling an exploratory bore on site at the end of last week, and is expected to take a further three weeks to reach the required depth of 120 metres.

If further water testing at various points during the drilling process continues to show low manganese levels, a main bore will be drilled in that location. This larger bore will be put to the test during its creation, to see if it can perform as a ‘master bore’. If it demonstrates it can pump the correct quantities required from the aquifer to supply Napier and ensure it has no negative effect on existing bores in the surrounding area, it will become a major water supply for Napier.

The project has been delayed because of the COVID-19 pandemic lockdown. However, if everything goes to plan from this point and the new main bore passes all the required tests, Council could be applying to the Hawke’s Bay Regional Council for a variation to its existing resource consent in early 2021 to switch the new bore on and turn two bores off ‘A1’ and ‘C1’. With approval, this would allow the existing bores to be decommissioned, and the new low manganese bore to be connected to the water network and begin operating.

“It’s great to see this project, one of the key ones from our Water Supply Master Plan, start to take shape,” says Keith Price, chair of the Sustainable Napier committee.

“Water projects feature heavily in our planning for the next few years, and this is a positive step forward in remedying the issues in our drinking water network,” says Councillor Nigel Simpson, who has the Three Waters portfolio.

This is one of the most significant current water projects that Council has decided to fast-track in the 2020/21 financial year. Council has $650,000 budgeted for this project, out of a proposed $40 million to be spent over the next three years on drinking water infrastructure.