Fossils tour digs up the past

The Aquarium's Jake Brookie will visit Hawke's Bay schools later this month - with fossils from 530 million years ago. 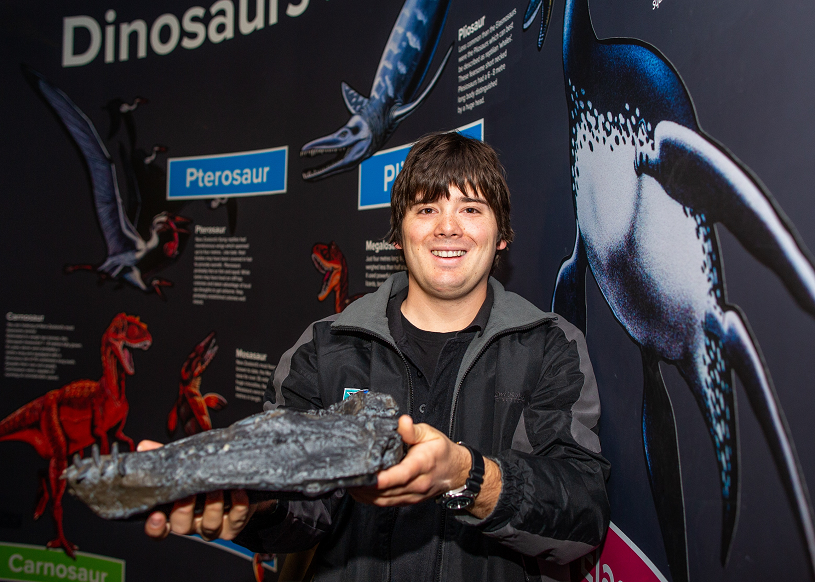 Jake Brookie, Education Officer at the National Aquarium of New Zealand, with some of his fossils

What does the first animal to have eyes have in common with the largest land carnivore ever to live?

Answer? They're both featured in the National Aquarium of New Zealand’s Fossil Tour. Visiting local Hawke's Bay primary schools during October and November, National Aquarium education officer Jake Brookie will be showing children fossils and bones from species long extinct, that were found all over the world, including Hawke’s Bay. “It’s very exciting. Effectively I will be bringing 530 million years of natural history into the classroom - except it’s condensed in two boxes,” he says.

The tour relates to International Fossils Day, now into its second year. The worldwide event is held on the 15th of October and aims to raise awareness of fossils around the world.

Not all fossils are as large and striking as the bone of a T-Rex. Fossil worm burrows and plankton can tell us just as much about a time long past, Jake explains. “Scientists use tiny plankton fossils to tell us about the ancient climate and the locations of fossils to discover how continents have moved. They may be millions of years old, but fossils are extremely relevant to science today.”

National Aquarium's Jake Brookie: "It’s very exciting. Effectively I will be bringing 530 million years of natural history into the classroom - except it’s condensed in two boxes."

During each session students will be able to touch most of the fossils and related items, including a replica of the first dinosaur fossil found in New Zealand. Discovered by Joan Wiffen in 1975 in northern Hawke’s Bay, the bone transformed our understanding of ancient New Zealand and how dinosaurs migrated. The actual fossil now resides in Te Papa.

The inspiring story of how the local amateur fossil hunter rocked the scientific world will also be told.

Jake has also been visiting the Napier Libraries to show fossils as part of the October Holiday Programme.

Each school visit will be free and last for 30 minutes. To book a place for your school, e-mail Jakeb@nationalaquarium.co.nz.