Another award for Safer Napier

Another accolade for the city's storied Safer Napier initiative. 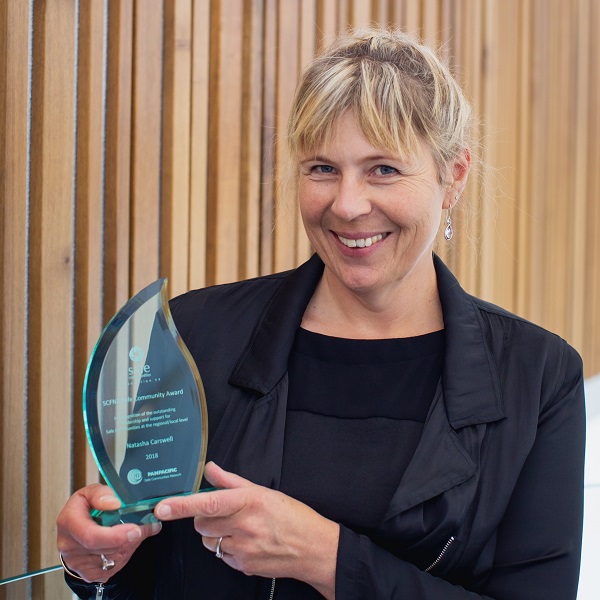 Safer Napier has picked up its third award in as many years, this time recognising a Napier City Council staff member.

Natasha Carswell, Manager Community Strategies, received the Safer Communities Foundation of New Zealand (SCFNZ) Safe Community Award at the organisation’s national conference last week. The award recognises someone who has demonstrated outstanding support for Safe Communities at the local or regional level through displaying best practice through delivery and leadership, and who has made a major commitment to furthering the goals of SCFNZ and Safe Community at the local community or regional level.

Safer Napier has been a key community development project for Council, says Natasha, and more than 40 organisations are now part of the coalition that helps drive the programme.

Tania Peters, Director of SCFNZ, noted during the presentation of the award that Natasha’s support and effort went “above and beyond” and she had been instrumental in leading the team to make community safety “business as usual” within NCC. She thanked her for her leadership, collaboration and alignment of local government priorities with effective strategies and projects.

Safer Napier has stood the test of time - not many programmes like this last that long – but because of the drive of Napier’s locals, and the support and framework of the international Safer Communities, it has gone from strength to strength.

NCC's Natasha Carswell: "We’ve taken a good idea to the next level. Safer Napier has a great group of people providing strategic direction and working on projects together."

“We’ve taken a good idea to the next level. Safer Napier has a great group of people providing strategic direction and working on projects together. It is nice to be recognised as an individual, but I also see it as recognition of the programme’s success, which is really down to the calibre of the people involved,” says Natasha.

Napier has been an accredited International Safe Community since 2010. This World Health Organisation (WHO) concept, recognising safety as “a universal concern and a responsibility for all", encourages greater cooperation and collaboration between non-government organisations, the business sector, and local and government agencies.