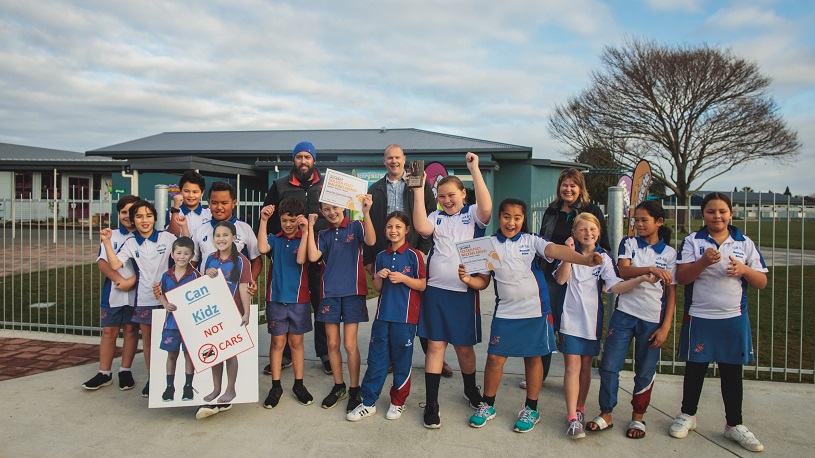 A collaboration with Henry Hill School has proved to be a winner for Napier City Council’s iWay team, which has received a national award.

The Golden Foot Walking Award for School Travel was presented to iWay and Henry Hill School by Julie Anne Genter, Associate Minister of Transport, at Parliament last week, in recognition of the Henry Hill Travel Plan, a project which only began a year ago.

The main focus of iWay is to improve cycling infrastructure and encourage both cycling and walking, encapsulated in its logo’s wording “iWay – walk it, bike it, love it”.

Travel plans aim to reduce car congestion around school gates to make them safer and calmer, increase students’ everyday activity and educate them as to why it is important, provide scooter safety and cycle skills lessons, and make traffic or footpath changes around the school, if required.

Henry Hill School, in Onekawa, had a long history of traffic problems, such as motorists parking on yellow lines, around their main entrance, at the end of a cul-de-sac, Dick Place. The school, NCC and police had all tried to fix these, with little success.

Prior to the plan, 70% of the school’s 250 students travelled to school by car, although the majority lived within one kilometre of the school.

iWay's Lyndal Johansson: "School entrances have become dangerous places over the last 10 to 15 years. The Minister (Julie Anne Genter) told me this is exactly what she would like to see happen all over the country."

Traffic calming zones were set up, and the students introduced to Move It, a programme established by iWay rewarding students for walking, scooting or cycling to school. Students were shown where it was safe for their parents to park, and following the lead of principal Jason Williams – and taking heed of his favourite saying “unplan… be responsive”, iWay decided to focus on increasing walking and scooting.

The message got through and there was a dramatic change after just a few months – rather than 55 to 60 cars trying to get in and out of Dick Place, it was about two to three. It also had the effect of increasing the networking between staff and parents. “Parents are now walking down the street with their kids, whereas in the past they may have just sat in the car around the corner. We’re seeing parents, we’re having conversations and creating really good relationships across our community,” says Jason.

Napier’s iWay team didn’t want to produce a bulky, formal plan for the school, and the way they approached this project paid off, says Lyndal Johansson, Community Cycling Development Officer. “The Minister (Julie Anne Genter) told me this is exactly what she would like to see happen all over the country. School entrances have become dangerous places over the last 10 to 15 years. We see this as an extremely important project which we hope to encourage at other Napier schools, and do our bit to counter inactivity and obesity in our children.”

The best advice Napier iWay can give to others wanting to follow their lead, says Lyndal, is to make sure, whatever they do, that the change is driven by the students.

The long term goal of iWay is to create the most extensive urban cycle network in New Zealand.