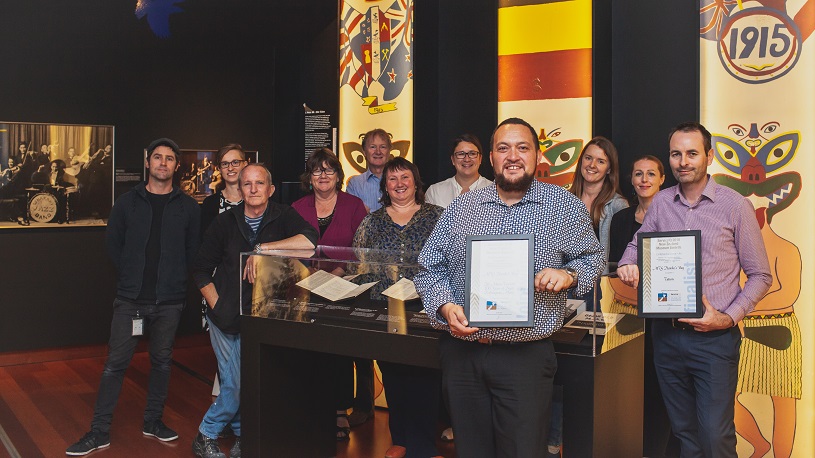 Some of the team involved with the He Manu Tioriori: 100 Years of Ngāti Kahungunu Music exhibition – this year’s joint winner of the Exhibition Excellence - Taonga Māori category at the 2018 ServiceIQ New Zealand Museum Awards.

An MTG Hawke’s Bay exhibition praised for reconnecting audiences with a musical tradition beginning in the early 20th century has been named joint winner of the Exhibition Excellence - Taonga Māori category at the 2018 ServiceIQ New Zealand Museum Awards.

He Manu Tioriori: 100 Years of Ngāti Kahungunu Music tracks the evolution from the action songs and poi developed during World War One through to Te Matatini, hosted in Hastings in February 2017. It is an insight into the social history of Ngāti Kahungunu through music.

The exhibitions and collections teams, along with curators Tryphena Cracknell and Charles Ropitini, were involved in the exhibition’s creation. Charles, a professionally trained baritone, hosted a unique tour of the exhibition during last year’s Winter Deco, singing his way around the exhibition.

The exhibition’s positive outcomes included a record setting open day coinciding with the Kaumātua Kapa Haka Festival at Te Papa in Wellington. It resulted in the highest numbers of attendees to an MTG open day since 2014, and a noticeable presence of young Māori families.

A second MTG exhibition, Tūturu, was also an awards finalist for Exhibition Excellence – Art. Tūturu (To be true) was a co-creation exhibition developed by MTG Hawke’s Bay and Iwi Toi Kahungunu, an artist collective for those of Ngāti Kahungunu descent, led by Sandy Adsett. It was developed to coincide with the biennial Kapa Haka Festival hosted by Ngāti Kahungunu to showcase the breadth of talent across visual and performing arts.

MTG Director, Laura Vodanovich: "Collaboration has been key to the success of all these exhibitions. For them to be recognised at a national level is wonderful, as is the fact our local communities have responded so well to them."

A third MTG exhibition, Yuki Kihara: Te Taenga Mai o Salome, was not a finalist but was given a special mention by the judges for Exhibition Excellence – Art.

“Collaboration has been key to the success of all these exhibitions. For them to be recognised at a national level is wonderful, as is the fact our local communities have responded so well to them,” says Laura Vodanovich, MTG Director.

This is the fifth year in a row MTG exhibitions have been finalists in the New Zealand Museum Awards.

Those who haven’t seen either the Yuki Kihara and He Manu Tioriori exhibitions still have a few weeks to do so, with the former closing on 5 June, and the latter on 22 July.

Last year, Somebody’s Darling: Stories from the Napier Cemetery 1855-1917, was a finalist in the Museum Visitor Experience Award category.

In 2015 MTG won the best exhibition under $20,000 category for Dr Felkin and the Forerunners, which examined a unique part of Hawke’s Bay’s social history. That same year MTG was also a finalist in two other awards – best exhibition over $20,000, and most innovative use of Te Reo Maori, for Whetu Tirikatene-Sullivan – Travel in Style.

In 2014 MTG won Best Museum Project, for the facility’s redevelopment, and was a finalist in the most innovative use of Te Reo Maori category, for the Taonga Māori exhibition Ūkaipō - ō tātou whakapapa.