Wonderful water savings made in Napier

"Great effort" sees Napier's water use fall by almost 30% from its peak. 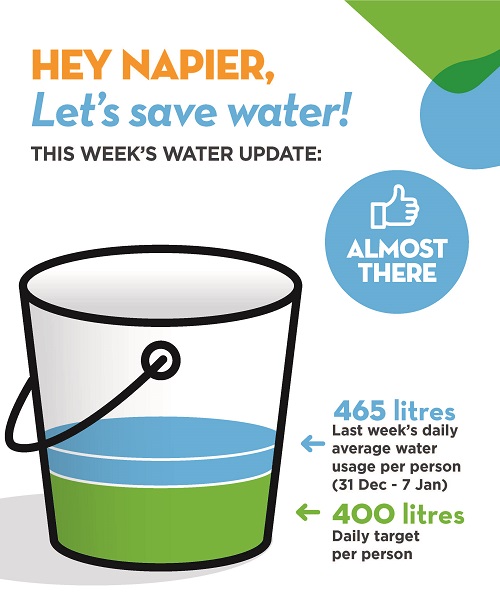 Napier’s Mayor is “delighted” with recent conservation efforts made by the Napier community.

During a period of very high water usage in December, the average per person per day take sat anywhere between 550 and 620 litres, and peaked at 642 litres on December 3, 2017.

Last week, the Napier community used an average of 465 litres per person per day which Mayor Bill Dalton is calling “a great effort when you consider just how many visitors were in town, enjoying our facilities, festivals and everything we have to offer.”

Napier City Council, itself a high user of water to service sportsgrounds, parks, gardens, fountains and its many community and tourism facilities, has also significantly squeezed its watering schedules and reduced its usage. “

Napier City Council, itself a high user of water to service sportsgrounds, parks, gardens, fountains and its many community and tourism facilities, has also significantly squeezed its watering schedules and reduced its usage. “There’s no doubt that Council plays a key role in the conservation effort,” continues Mayor Dalton. “Our very skilled staff are keeping Napier’s parks usable and accessible, and our city gardens irrigated, while managing our own water use.”

A water conservation campaign in conjunction with Hastings District Council has helped keep the messaging on water use “front and centre of people’s minds,” he says. “With helpful tips on radio and in the newspapers, digital screens, Facebook reminders on water use and video content all part of the mix, we’re reaching a large number of our water users every week.”

A bucket graphic showing the prior week’s usage for Napier will also be used digitally and in print over the remaining weeks of summer.