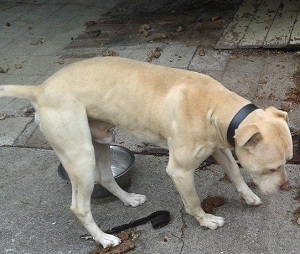 Bronx, a golden male American Pit-bull Terrier Cross, was taken on 20 May at midnight by thieves who cut a razor wire surrounding the pound, climbed the roof (setting off the alarm) and cut three padlocks to get him out.

Napier City Council Animal Control Officer, Liisa Skipper, says the Council was holding the dog while the owner was getting money together to have the dog de-sexed.

“Bronx was in the pound for four days when he was taken,” Ms Skipper says. “He is micro-chipped and we have notified all Animal Control units throughout the country so we’re confident we’ll find him.”

Napier Police are investigating the incident, which follows a similar incident at the Hastings District Council Pound facility just days prior.

Ms Skipper said new security cameras and sensors are being installed at the Pound to ensure the safety of both the public and the animals being held.
If you have seen this dog or know its whereabouts please phone Napier City Council Animal Control on 834 4177.