‘Dogs on the beat’ for Napier Pound

Members of Napier’s Animal Control team are delighted with the response to an initiative that sees them bringing their own dogs to work one day a week. 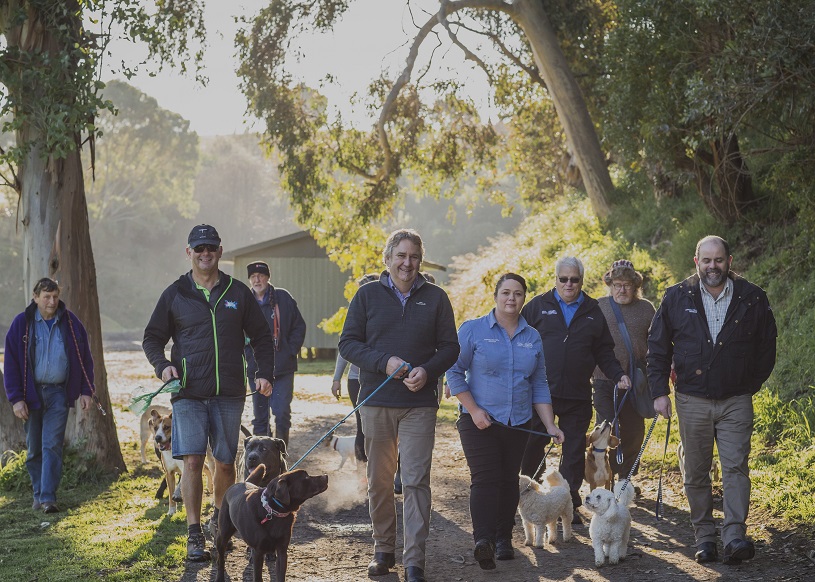 David Whyte, Team Leader Animal Control, says it’s a great way to encourage the canine (and human!) community to approach his Animal Control staff when they’re out and about along Marine Parade or at Park Island – places locals love to walk their dogs. “We’re finding that people are much more likely to come up to us and start a conversation about their dog, how they’re going with training, how to get their dog chipped or whatever else is on their mind, when we have our own dogs with us,” he says. “We’re all nutty about our dogs!”

But it’s not just staff dogs out on the beat with the Animal Control team. Mr Whyte – a former police dog handler who also breeds hunting Labradors - says the team often takes impounded dogs, particularly those who are earmarked for rehoming, out for walks around the many reserves and public pathways in Napier. “It’s a chance to socialise them, see how they interact with other dogs and what their temperament is like away from the Pound. It’s also a way to create discussion with the public on our role within Napier City Council, how we assess the dogs, and how we care for them while they’re with us.”

Director City Services Lance Titter says excellent customer service has been a huge focus for his team in the last six months. “Having dogs out on the beat really breaks down the barriers,” he says. “We can explain our processes and how, if we find a dog wandering and it’s tagged and microchipped, our priority is to return that dog straight away, without it even setting one paw in the Pound.”

Education is another key focus for the team. “We have a huge issue at the moment with people dumping unwanted dogs at the Pound,” Mr Titter says. “We regularly find dogs just tied up outside when we come in in the morning because owners can’t handle the breed, or they are moving house or can’t afford the vet bills. We need our community to think carefully and learn everything they can about the breed, and what they’re getting into, before they get a dog.”

NCC's David Whyte: "We’re finding people are much more likely to come up to us and start a conversation about their dog, how they’re going with training, how to get their dog chipped or whatever else is on their mind, when we have our own dogs with us. We’re all nutty about our dogs!”

It’s also important that owners of dogs classed as menacing under the Dog Control Act take the necessary steps to de-sex and register their dogs, as well as muzzle them in public. A recent campaign – dubbed Operation Underdog and funded by the Department of Internal Affairs – saw 26 menacing Napier dogs neutered free of charge this year. Nineteen of the 26 were also registered free of charge up until the end of the 2016/17 registration period.

“A neutered dog is generally more settled, less likely to become aggressive, and of course can’t breed more menacing dogs,” says Mr Whyte. “But if dog owners do find they are having problems controlling their dogs, whether menacing or not, we’re more than happy to take some time to help them with basic tips and training. There’s a view that our role is to put dogs down. We actually try very hard not to euthanise animals and we work closely with Adoptadog and the SPCA to do that, as well as promote any dogs suitable for rehoming through our own Napier City Council Facebook page. We have robust policies and devoted staff who just adore the animals, they are fed really good Iams dog food, and Lance brings them doggie treats all the time, especially on Christmas Day.”

Mr Whyte himself owns has six dogs - “A very old friend of mine passed away a year ago and left me his dogs and his kennels” – while Mr Titter has two. “One is a rehomed dog who was left on the doorstep of my house, with a letter asking if I’d take her. I still have no idea where she came from but she’s a beautiful dog with a beautiful nature. I couldn’t say no.”

Mr Whyte says a cooling system to keep the Pound temperature controlled in summer months will be one of the first to be installed in any New Zealand animal shelter. “It will be fitted shortly, so that our Pound guests are comfortable year-round, and will be signed off by the Ministry for Primary Industries.”

After the popularity of the 2016 event, the Napier Pound is also working towards its second Bark Island Doggie Day Out, scheduled for Sunday 12 November 2017. Further details on the event will be announced over the coming weeks.