Moa bones to go on display

A donation of moa bones - including the pelvis and femur of a North Island giant moa - are about to go on permanent display at the National Aquarium. 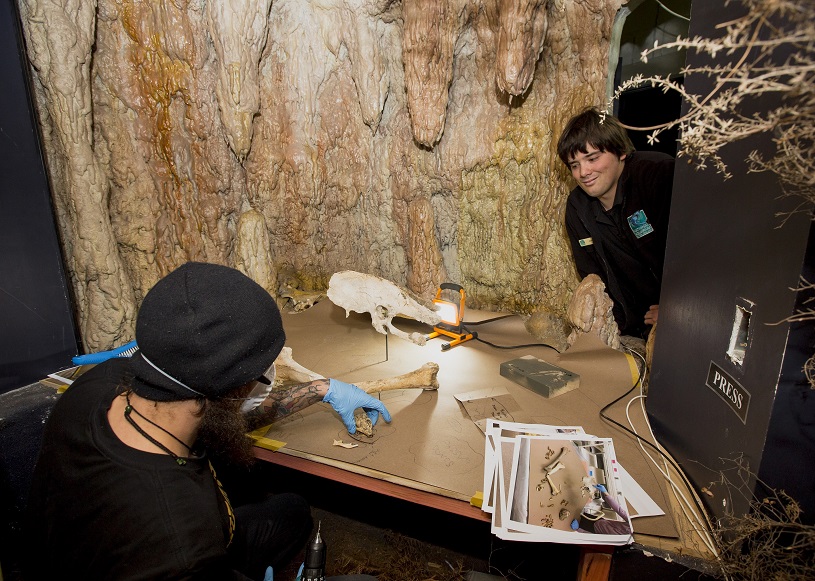 A new exhibit has opened at the National Aquarium of New Zealand - and it has been over five centuries in the making.

In December, National Aquarium staff received a donation of moa bones from Huriana Lawrence of the Maraenui and Districts Maori Authority. Found in a cave in the Kaweka Range, the bones included a pelvis and femur of a North Island giant moa, the second largest moa species.

National Aquarium and MTG Hawke’s Bay staff have worked together to put the taonga on permanent display.

The display, which is set within the National Aquarium’s Lake Whare Hut, also acknowledges Huriana’s wish that more than one name for the extinct bird is recognised.

National Aquarium Educator, Jake Brookie: "It is truly magnificent for the public to see these bones. Along with the presence of ash and possum bones mixed in with the moa remains, they create a picture of a New Zealand that was very different hundreds of years ago."

“It is truly magnificent for the public to see these bones. Along with the presence of ash and possum bones mixed in with the moa remains, they create a picture of a New Zealand that was very different hundreds of years ago,” says Jake.

Once the bones were handed over, technicians from the MTG began the balancing act of both displaying and protecting the artefacts.

The technicians are used to working with a lot of different objects - tea cups and saucers, musical instruments, Taonga and other amazing treasures, says Tom Mohi, exhibition technician. “Getting to make display mounts and work with moa bones was definitely an awesome experience and a highlight for me. It was an absolute pleasure and a privilege to be part of this exhibition and I hope the public and National Aquarium patrons enjoy it as much as I enjoyed working on them,” he says.

Moa are arguably New Zealand’s most famous extinct animal, dying out approximately 500 years ago. Nine species of moa existed and ranged from just over a metre tall to a towering three metres or more. All ate plants and distributed seeds around the ancient bush. There are many theories as to why they became extinct ranging from hunting, introduced rats and volcanic activity with the answer likely to be a combination of these.