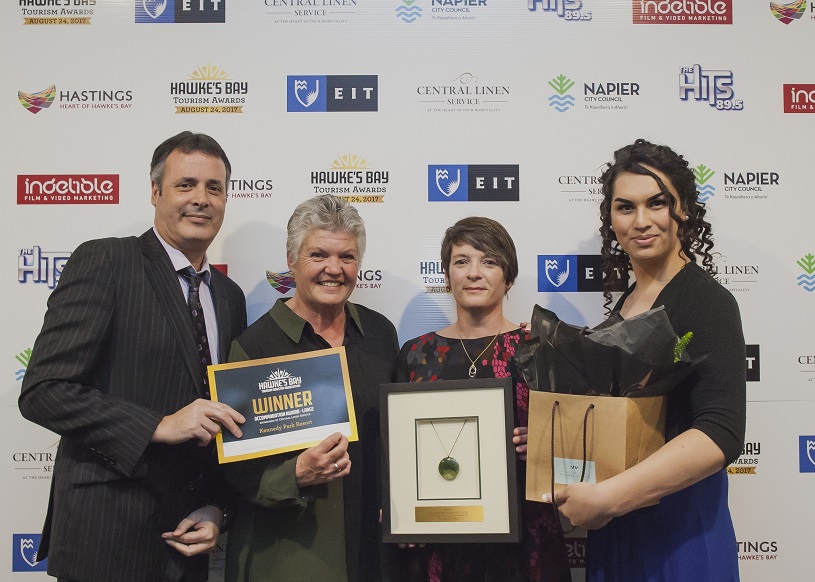 Kennedy Park Resort Napier is going from strength to strength, receiving awards, top ratings from Qualmark and now having its manager being elected president of the Holiday Accommodation Parks of NZ (HAPNZ) within the space of a few weeks.

David Aflallo, manager of the Napier City Council owned facility, says the past few weeks have been very exciting for staff.

It received a gold five star rating for the holiday park portion of the facility, and gold 4-plus for its motels section from Qualmark, New Zealand’s internationally recognised rating system which is managed by Tourism New Zealand. Qualmark’s rating system has changed in the past year and now places more emphasis on sustainable business practices.

Mr Aflallo has been vice-president of HAPNZ this year prior to being elected president. “I’m really excited to have the opportunity to represent HAPNZ and Kennedy Park Resort at the highest level. It tops off what has been a couple of amazing months for us.”

Kennedy Park's David Aflallo: “I’m really excited to have the opportunity to represent HAPNZ and Kennedy Park Resort at the highest level. It tops off what has been a couple of amazing months for us.”

HAPNZ is a trade organisation representing the holiday accommodation park sector in New Zealand, with 300 holiday park members and a further 80 company and organisation members. Together they comprise more than 75% of the commercial holiday parks in this country.

Liz Read and Fenton Wilson, who judged Kennedy Park for the Hawke’s Bay Tourism Awards, spent time with Mr Aflallo and his team and they could see why they were so successful, saying that “An obsessive focus on service, a meticulous use of data to build long-lasting relationships with their guests, and a truly comprehensive dedication to environmental and social sustainability are all integral to Kennedy Park’s success”.

Kennedy Park supports the community in a number of ways, including being a sponsor of the Taylor Hawks Basketball, Hawke’s Bay Magpies, the Hurricanes Investec Super Ruby team, and the NZ Secondary Schools Track & Field Championship.

Kennedy Park was established 80 years ago as a motorcamp by the Council. During WWII it was used by the New Zealand Army. Post war, it was used to provide transit housing for families awaiting permanent housing.

More recently, in July, the facility provided emergency accommodation to motorists who had to be evacuated from SH5 due to snow.