Ensuring the ongoing health of the Ahuriri Estuary and Westshore Wildlife Reserve is one of the key goals for the construction team working on the State Highway 2 - Watchman Road intersection project. 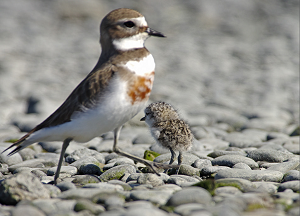 The estuary is classified as a wetland of national and ecological significance.  Over 70 species of bird have been sighted in the area, including threatened species such as the Australasian bittern, New Zealand dabchick, banded dotterel and black-billed gull.  It is also an important habitat for eels, fish and some shellfish.

NZ Transport Agency system manager Wayne Oldfield says as part of the environmental mitigation measures associated with the project, a large portion of land at the southern end of the Westshore Wildlife Reserve is being converted into what is known as a scrape lake.

“We’re trying to create a feeding, roosting and breeding area for small wading and waterbird species, such as dotterels, plovers, stilts and the seasonal influx of a wide variety of migratory birds which annually visit the adjoining Ahuriri Estuary.  It’s a fair way from the main construction site, so we wanted to make sure people knew what was going on.”

Environmental consultant Tony Billing says the wetlands within the Westshore Wildlife Reserve are non-tidal which makes this form of construction ideal for this area.

“We’re also developing dedicated bird roosting sites which will be constructed by raising the land slightly above the existing water level in order to provide birds with a safe and secure site to rest.”

“The new area will greatly add to the wildlife value of the Wildlife Reserve and will also provide a good opportunity to ornithologists to observe a wide variety of bird species.”

The Transport Agency has also worked closely with the Department of Conservation, Forest & Bird, the Ahuriri Estuary Protection Society and the Napier City Council to develop the new estuary and wetland environment.