Three site options for the war memorial (comprising the Roll of Honour and the Eternal Flame), have been 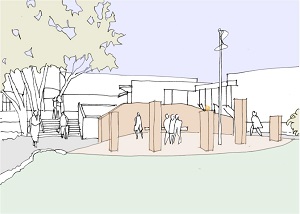 released for feedback by the working party tasked with the project of rehoming them.

The plaques and eternal flame were once housed outside the Guy Natusch-designed War Memorial Hall, but were later enclosed within a foyer inside the building during its conversion to a conference centre in 1995. This meant that when the centre was booked out for a function or locked up over a weekend, the memorial was unable to be accessed by visitors wanting to pay tribute to fallen soldiers.

Now, the Napier community is being invited to feed back on the three options for a new memorial, with each option accessible 24 hours a day, seven days a week. Each of the memorial options is located in a place that enables the community to pay its respects in a dignified manner.

Napier Mayor Bill Dalton says that each of the three concepts, devised by Citrus Studio architect Brent Scott in consultation with the Working Group, needed to provide “a powerful and peaceful place to reflect – a place with mana, and a place to feel inspired”. He says he is extremely pleased with the initial concept sketches. “War memorials can take many forms, but common to them all is that they remind us of what we have lost to war and allow us to remember. Each of these early designs has advantages, and each provides a sense of history, meaning and gravitas. Additionally, all are accessible at all times to the public, to our veterans and to the descendants of our soldiers, and that’s important.”

The three options are as follows:

The preferred option of many of the Working Group, including Mayor Bill Dalton and consultant and architect Guy Natusch, the war memorial and eternal flame would take a powerful position adjacent to the Napier Conference Centre. Connected both visually and physically with its historical home, this is a space that visitors would move through, rather than past. The Roll of Honour would be inscribed on the wall behind the existing Floral Clock, and there is the possibility of flags, lighting and sculptural elements, as well as projection onto the walls of the Napier Conference Centre during significant events, all of which would further enhance the space. The eternal flame would be at height. Meanwhile, the Floral Clock itself would be relocated to a location in the Sunken Gardens. There have been numerous issues with growing appropriate foliage here due to the shade and exposure to southerlies. All of the grandchildren of A.B Hurst, who gifted the Floral Clock to Napier, have been consulted on this option and are in agreement that this is a logical step.

This is the most ambitious and largest scale of the three concepts, visible from Tennyson Street and close to MTG Hawke’s Bay. It would provide plenty of space for Anzac Day services, with the cenotaph relocated from Memorial Square. A place to pause and reflect, with stunning vistas of the sea and rising sun, the Roll of Honour would be inscribed on vertical elements, and a pathway created through the lawn to access this area. The Eternal Flame would be at height.

A space would be created at the intersection of the lawn and the skating rink, close to the Sound Shell and Veronica Sunbay. It could be accessed multiple ways and would lead visitors out to the waterfront or towards the CBD. Trees would provide a canopy and a frame for this memorial, and as with the other two design options, vertical elements would house the Roll of Honour and Eternal Flame.

Mayor Dalton says he wishes to highlight the fact that the drawings accompanying each option are just concepts at this early stage. “Some features may change while we look at options for materials and so forth. What won’t change is ensuring each design fits the space and the site’s natural and built environment.”

Mr Natusch agrees with this approach. “If the War Memorial elements were to be accommodated together at the Floral Clock location, and the hall renamed, I would feel that the memorial components were adequately restored and able to be read together, rather than separately. I congratulate Brent Scott on his concept designs. What matters now is how the visual connection to the Conference Centre is established, and how the community and the Council are able to work together to create a serene and compelling space, accessible by all and at all times by those who wish to reflect. It is also vital that the chosen concept – and they are only concepts at this point – is reviewed to ensure it complies with heritage elements.”

Mayor Dalton emphasises that community feedback will be key to any Council decision on the location of the new memorial. “This is by no means a ‘done deal’ and we invite all feedback on this topic, via our website, by letter, or at our public meeting on Tuesday 1st August.”

Fill in our online form to select your preferred option and make any comments.

The three war memorial options will be debated and discussed at a public meeting at the MTG Century Theatre at 5:30pm on Tuesday 1st August. The meeting will be attended by members of the project working group, including the Napier and Taradale RSAs, Council officers involved in the project, and Brent Scott from Citrus Studio.