Napier City Council staff are considering the implications of the outcome of Detailed Seismic Assessments carried out on the Library and Civic Administration Buildings. 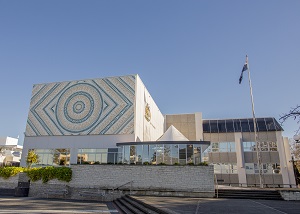 The review, presented to NCC this week, has found that both buildings have structural deficiencies of varying degrees. The Civic Building – which houses the Council chambers, Mayor’s office, Chief Executive’s office, and a number of staff from the Corporate Support and City Strategy directorates – has been found to contain generic shortcomings throughout the building. “The building is unlikely to be fixed or refurbished – even on a temporary basis,” says CE Wayne Jack.

Under the Building Act’s Earthquake Prone Building legislation, a seismic rating (% National Building Standard) is assigned to a building. This rating compares its performance to that of a new building of similar size, make-up and form, in the event of an extreme seismic event. Strata Group Consulting Engineers undertook the assessment and found the Civic Building to be at 10% NBS for a one in a thousand year event.

Guy Lethbridge of Strata Group says that when measured against today’s earthquake risk criteria “the analysis has revealed structural weaknesses that reflect the construction and design techniques typically used at the time.”

The soon to be updated Building Act, (1st July 2017), states that building owners of classified buildings have 2.5 years to assess the structure and 7.5 years to conduct seismic upgrades, if required.

However, given the public function of the building, and the fact that Council buildings are assessed to a higher standard due to their importance to the community, Mr Jack says he and Mayor Bill Dalton made the decision to move forward now. “Our people are our top priority,” says Mr Jack. “With our staff and community front of our minds, we are taking steps to ensure that our Council teams, and those that interact with our buildings, feel as comfortable and confident as possible.  We will relocate all our teams and our front counter from the Civic Building, and are aiming to do this as quickly as we can.”

Staff will begin exiting the Civic Building with the moving process beginning today. Committee and Council meetings will be held offsite, while affected NCC staff will be accommodated in nearby office buildings and other Council facilities until a permanent solution is found. “We’re already in discussions with commercial landlords in the area,” Mr Jack says.

Mayor Bill Dalton says he’s impressed with the speed at which the NCC team has acted on this matter. “These are major buildings requiring major decisions,” says Mayor Dalton. “It’s fairly common to see some of New Zealand’s older-style buildings fall short of the Act so I’m very pleased that the team had already started their preparations for a range of scenarios.  One of those scenarios was the possibility that our teams would have to move out.”

The neighbouring Library Building, which houses the remaining NCC teams, the city Library, and the Napier branch of the Inland Revenue Department, will require strengthening work to meet the provisions of the Act. This work will be started as soon as practically possible, says Mr Jack. “We’re lucky that unlike in the case of the Civic Building, the bones of this building are strong, and that strengthening work is relatively easy to implement,” says Mr Jack. “However, there is a programme of work that needs to be undertaken to lift our rating up to where we want it – which is 100% or as close to 100% as possible. There will be some disruption to staff and services during this time and we hope that our community will be tolerant as we work through this.”

Currently, the Library Building - built in the 1980s - is rated at 15% NBS for a one in a thousand year seismic event. While it might sound concerning, says Mr Jack, the building’s issues are “relatively quick and simple to remediate.”

The first stage of work, which is limited to minor works within the stairwells and to improving the seating for the precast units throughout the Library Building, will begin as soon as possible and is likely to see the Library Building rating move to as close as possible to Council’s target of around 50% of NBS. Further refurbishment work, budgeted for in the Long-Term Plan, will see a number of further improvements, lifting the status of the building to “as close to 100% as possible,” says Mr Jack.

Mr Lethbridge says the Library Building is “primarily robust, fit for purpose and therefore worthwhile strengthening, in my view.”

“While attempting to strengthen the Civic Building would be a complex and widespread undertaking based on early feedback, we do not believe it represents value for money in that the strengthening costs could be more than a new build. Conversely, there is a strong case to be made for improving the strength of the Library Building as this can be done through relatively straightforward works.”

Notices at entry points, to advise the public of the seismic status of both buildings, will be erected by close of business. Further updates on the change in location of the front counter and other Council services will be made as soon as their new locations are determined.

Both building seismic reports are available to read.