Major Hawke’s Bay businesses have thrown their support behind the Be Safe Be Seen campaign being run by iWay over the next few weeks. 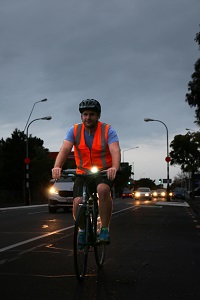 The annual campaign encourages cyclists, walkers and runners to have the correct equipment – lights, bright clothing and other reflective gear – if they are out and about in the early mornings and evenings.

Napier Port, Mr Apple, Pan Pac, Heinz Watties and Mitre 10 Mega, which all have significant numbers of staff who commute to work on bikes, will be visited by the iWay crew. “It’s fantastic these businesses are supporting Be Safe Be Seen and allowing us to go directly to their cycling employees to help spread awareness of our campaign,” says Lyndal Johansson, Sport Hawke’s Bay Walking and Cycling Coordinator, who is leading the project for iWay.

Be Safe Be Seen will also be seen on the streets of Napier and Hastings over the coming weeks, with several street promotions lined up.

The campaign is also supported by Sport Hawke’s Bay, USO Bike Ride, Road Safe Hawke’s Bay, Napier Community Patrol, ABB and New Zealand Police. Police will be handing out lights to people who need them, along with information about Be Safe Be Seen, during their normal duties.

Cycle counts were recently taken at seven sites in Napier selected by the NZ Transport Agency (NZTA), between 7am and 9am on the same day this year as in 2016. The average increase across all routes was 10%, with off-road routes such as Marine Parade and the Marewa Loop, encompassing the Georges Drive and Riverbend Road pathways, showing the biggest increases. Readings taken from a permanent counter installed last year on the Prebensen Drive off-road route has confirmed it is Napier’s busiest route, sometimes topping 200 cyclists a day.

Hastings’ permanent cycle counter on Havelock Road continues to show that more than 200 cyclists a day are using it, while its one-day survey of seven sites recorded 571 cyclists between 7am and 9am.

“Regardless of whether you’re out exercising, or on your way to or from work or school, other road and pathway users need to be able to see you clearly to reduce the risk to you and to others,” says Graeme Taylor, Napier City Councillor and chair of the iWay Project Delivery Group (Napier).

Hastings Deputy Mayor and keen cyclist Sandra Hazlehurst said it was wonderful to see the cycling culture across Hawke’s Bay continuing to grow. “A lot of the enthusiasm comes down to the more than 200 kilometres of pathways that have been put in over the last seven years and the region’s excellent cycling weather.

“What comes with that is the desire to keep everyone safe and therefore we hold these Be Safe Be Seen programmes to encourage a focus on taking care on the roads and cycleways,” she said.

Hastings District Council initiated iWay, then called a model communities project, in 2010. It has run the winter cycling safety campaign as part of its iWay programme since 2013. Hastings District and Napier City Councils have worked together on iWay, including campaigns such as Be Safe Be Seen, since 2015.

It aims to ensure cycling and walking infrastructure across the two cities and district is consistent, and allows the sharing of events and educational programmes. Central Government funding, which covers approximately two thirds of the cost of iWay, is guaranteed until next year.