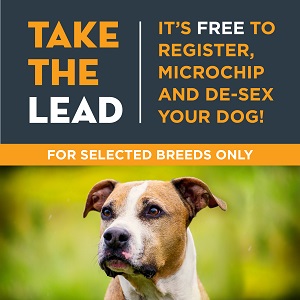 It’s all paws on deck at Napier City Council as the team launches a new campaign that will benefit potentially hundreds of dog owners.

Council is offering free neutering, micro-chipping and registration for dogs classified as “menacing” under the Dog Control Act.

The package is worth up to $300 and is available to owners of American Pitbulls, Brazilian Fila, Dogo Argentino, Japanese Tosa and Perro de Presa Canario and any related cross-breeds.

“Many are not yet neutered - which they must be under the Act. We’re aiming to remove any cost barrier that might prevent dog owners from doing the responsible thing and having their dog de-sexed – which in turn ensures the dog is less likely to roam, bite and fight, and helps make our kids and communities a lot safer.”

There were 98 recorded dog attacks on people or other animals in Napier in 2016 – many of the attacks on children. While it’s not known which particular breeds were responsible for the attacks it’s important to encourage dog owners of higher-risk breeds to protect themselves and their friends and neighbours.

Dubbed Operation Underdog, the Napier campaign will see staff out on the streets and calling in to the homes of those who could benefit from the programme.

Any unregistered, classified dogs will be registered and a voucher issued for free micro-chipping and neutering at Carlyle Vet Clinic.

“We’re hoping to offer this service to at least 100 dog owners, but if it’s really popular, we have the ability to fund many more.”

The Operation Underdog campaign is likely to cost around $17,500 and is being funded by a Ministry of Internal Affairs grant.

Promotional activity will include a public information meeting, advertising, posters, and social media.

“We’ll also be working closely with the SPCA, Housing New Zealand and other local agencies to spread the word on the programme,” says Ms Brereton.

Non classified dogs can also benefit from free micro-chipping and registration during the campaign period, which runs until 31 May 2017.

For more information see the Operation Underdog page on our website.