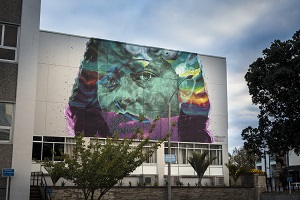 Napier City Council, in partnership with the PangeaSeed Foundation and Alternative Arts Initiative are excited to announce it is bringing Sea Walls: Artists for Oceans back to Napier between March 19 and 26 with a fresh line up of 20 extraordinary contemporary international muralists.

Artists from the US, Brazil Russia, Portugal, France, Germany, Australia and New Zealand will take part in the project and paint large scale murals that address pressing ocean environmental issues.

“This year we’ll branch out into new mediums such as sculpture and installation based works, and provide the opportunity for local Hawke’s Bay up and coming mural artists to be part of the festival,” he says.

Napier will boast 49 strong public works of art following this year’s event, that will surely inspire the community to become better stewards of the sea, he says.

“The event was a great success last year with the creation of 29 large scale murals, raising awareness about critical ocean issues, while beautifying the town and creating a real sense of pride and ownership of public spaces by the local community and visitors.”

Hawaii-based PangeaSeed founder and director Tre’ Packard is looking forward to returning to Napier to lead the project and support the artists.

“We’ve held the Sea Walls project in Los Angeles, San Diego, Miami, Canada, Grenada, Vietnam, Mexico and Sri Lanka. By taking the oceans into the streets we aim to inspire communities to be aware of and be proactive about what is happening to our oceans,” he says.

We think New Zealand is a special place, with a unique marine environment deserving of protection, and we look forward to enriching Napier’s urban landscape with more murals,” he says.

Napier Mayor Bill Dalton says the existing murals have been a wonderful addition to Napier’s streetscape, and he’s heard many positive comments about them since last March.

“I’m really looking forward to seeing what this year’s group of artists produce. Napier is very lucky that the PangeaSeed Foundation has chosen us once again to showcase this unique blend of art and environmental awareness.”

The festival will provide some great opportunities for families to participate, such as a scavenger hunt that promotes ocean awareness, organised by US organisation Bowseat, and an art exhibition of the participating artists’ work.

For those who want to hear more from the artists themselves about their work, PangeaSeed and the role of mural art in raising awareness about the environment, there will be an artists’ panel discussion on Saturday, March 25 at the MTG Hawke's Bay.

The painting will take place over five days – March 20th to 24th – and the artists welcome the opportunity for locals and visitors to stop for a chat about their work and the cause.