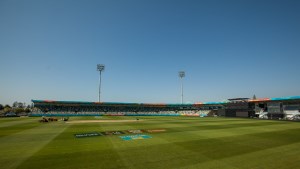 Napier City Council says the decision to cancel the upcoming cricket international at McLean Park, while disappointing, is “the right one”.

The BLACKCAPS were set to meet South Africa in the One Day International on 1 March, however an independent assessment of the ground has prompted New Zealand Cricket and Napier City Council, who owns the venue, to move the game to Hamilton.

Mayor of Napier, Bill Dalton, says the decision was not an easy one to make, and he’s “bitterly disappointed on behalf of the fans, and for the players, and the Council.”

However the turf at the park is no longer fit for purpose, the assessors’ report has found.

“The investigation has uncovered some problems with the ground – problems that are not able to be resolved in time for 1 March. In essence, we have a fantastic ground in a superb location, but the turf is old and it has deteriorated dramatically in the face of the recent drought conditions Hawke’s Bay has experienced. There are issues with the organic matter beneath the surface of the ground – issues we didn’t know about and are now urgently dealing with.”

Napier City Council Chief Executive Wayne Jack says that Council is preparing to completely replace the turf, and will do so as soon as possible. “With the life span of the turf in mind, Council had already budgeted almost $900,000 through the Long Term Plan for a full replacement in 2018/19. However with the knowledge we now have, we’re bringing this project forward into 2017 so that we can get games back on the ground in Napier as soon as logistically possible. The project includes improvements to irrigation, drainage, the playing surface and lighting and will put us in a leading regional position when it comes to hosting world class sport. We’ve forecasted for this, we have the funds, and we will now reallocate those funds with urgency.”

A draft report points to issues with the park’s sand carpet and a drainage system that is not able to withstand “extreme” conditions, such as those experienced in late January. “The weather was very hot and dry with no rainfall at all, so our grass needed water, but our drainage system wasn’t up to the task,” Mr Jack adds.

Mr Jack says he’s been in almost daily contact with NZC since the game against Australia was abandoned on 2 February, and that they fully support Council’s decision to push ahead with the upgrade, scheduled for later this year. “We’ve worked through all scenarios with NZC, including the scenario where we completely cover the park and closely monitor the drainage situation in order to host the game. Even if NZC and Napier City Council throw every resource possible at the park, there will always be a degree of risk, and we don’t want to put anyone through the disappointment of another rained out game. We’re in agreement on that, and on the pathway from here, and are now really looking forward to getting started.”

NZC Chief Operating Officer Anthony Crummy is extremely keen to get matches back to the region and says NZC is already working with Council towards that goal. “We can look forward with confidence to McLean Park hosting next summer’s ODIs between the BLACKCAPS and England, and the BLACKCAPS and Pakistan.”

Mayor Dalton says Council will also introduce an improved quality assurance programme “so that all parties remain 100% confident of the park’s performance in all weather conditions in the future.

"Council is absolutely committed to addressing the issues at McLean Park and providing the best regional facility for hosting international cricket in New Zealand, as well as for codes such as rugby and league. We thank NZC for its ongoing support and are very much now looking to the future, and to progressing these exciting developments at the park.”