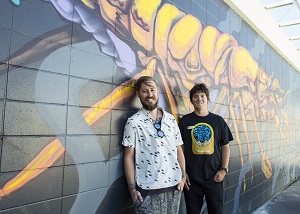 Locals and visitors have a chance to find out more about Napier’s Sea Walls murals, thanks to free guided walks during Seaweek 2017, to be held next month between 26 February and 5 March.

"Everyone knows something interesting about Antarctica or the Amazon River, but closer to home the natural world can be a mystery," says National Aquarium of New Zealand Educator Jake Brookie.

Mr Brookie has teamed up with Napier-based mural artist Cinzah Merkens to lead the walks to view the murals in Napier's CBD and Ahuriri, focusing on how they have been made and what they depict.

Napier hosted New Zealand’s first Sea Walls: Murals for Oceans festival in March last year. Sea Walls events, founded by the Hawaii based non-profit PangeaSeed Foundation, are held all over the world and use contemporary art to raise awareness of ocean environmental issues.

Mr Merkens, PangeaSeed’s New Zealand Coordinator, is currently involved with organising the second Sea Walls: Murals for Oceans festival in Napier, to be held between 17 and 27 March 2017.

“I'm excited to work with the National Aquarium and give a little insight into this amazing body of work. Our artists had an incredible time working with the community and volunteering their time, gifting these works of art to our city. The works beautify Napier and also convey powerful messages about the issues currently affecting our oceans,” says Merkens.

Each artwork puts a spotlight on conservation issues as varied as littering, overfishing and climate change.

Mr Brookie will also lead a walk around the Ahuriri inner estuary, speaking about the animals and the habitat along the way.

“Our estuary is more than just mud. Not only is it home to worms with jaws and over 20 species of fish, it is visited by birds from all around the world,” says Brookie.

Seaweek is held annually to raise awareness of the ocean's biodiversity as well as the need to protect it. There are lots of local events this Seaweek, from beach clean ups to library programmes.

“The Hawke’s Bay Seaweek team have come up with a huge variety of events for all types of people and interests. There really is something for everyone,” says Regional Seaweek Coordinator and National Aquarium Education Team Leader Carol Larson.

This year's theme is Toiora te Moana - Toiora te Tangata - Healthy Seas, Healthy People. The theme focuses on how the ocean is intertwined with our wellbeing.

The National Aquarium, supported by Napier City Council, is acknowledged as an official supporter of Seaweek 2017, along with other organisations such as the Department of Conservation, NZ Marine Studies Centre University of Otago, Greater Wellington Regional Council, Environment Canterbury Regional Council, DSP Print Group Ltd and many local sponsors. The New Zealand Coastal Society will again sponsor the prize for the winning Seaweek Ocean Champion for 2017.

Seaweek is organised by the New Zealand Association for Environment Education (NZAEE). Supporters can see the benefit in the educational outcomes from having an annual focus on the issues affecting the oceans, and in the ways communities and schools can become involved, says NZAEE Executive Member and Seaweek Programme Manager Pam Crisp.

“It’s wonderful that we are now able to continue to grow the event and engage more people in this fun and informative week about the sea. Many thanks to our supporters for their continued commitment to Seaweek.”