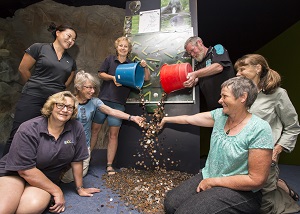 Established in 2002, Save Our Kiwi Hawke’s Bay is a partnership between the Environment, Conservation and Outdoor Education Trust (EcoEd) and the Department of Conservation, which aims to retain and restore a wild kiwi population in Hawke’s Bay.

“We have a coin drop game in one of our exhibition areas and every year or so we change the organisation we raise money for,” Mr Hewitt says.

“The Save Our Kiwi Hawke’s Bay project was a deserving recipient, and a fitting one since we have a kiwi enclosure here at the Aquarium.”

When the EcoEd Trust was formed in 2002, only 300 eastern brown kiwi were estimated to live in the Kaweka Range. Chick mortality, due to predation (mainly by stoats), is extremely high with just one out of every 20 kiwi making it to adulthood. The Kaweka population was expected to disappear by 2050.

In 2008, the PanPac Kiwi Crèche was opened near Tutira, which substantially increased the team’s capability to successfully raise kiwi and release them back into the wild.

Over the past 15 years, the efforts of the EcoEd Trust volunteers have helped grow the local Kaweka population by nearly 250 birds.

“We have a team of about 12 highly skilled and dedicated volunteers. Together they put in about 4500 volunteer hours every year to grow the local kiwi population,” EcoEd Trust General Manager, Kahori Nakagawa, says.

“While in the crèche chicks are regularly monitored by the volunteer team. Once a kiwi reaches a weight of 800 grams to 1kg they are deemed large enough to fend off stoats and are released back into the environment.”

The crèche is open to the public. Volunteers give educational talks on Tuesdays although bookings are required. Donations are welcome. For more information please email admin@ecoed.org.nz