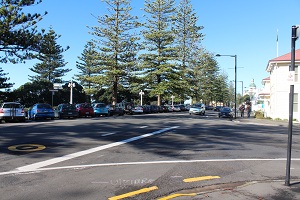 Napier City Councillors have supported a recommendation to progress the construction of a fully-funded roundabout at the Browning Street/Marine Parade intersection, as part of a commitment to enhance Marine Parade with additional traffic management measures.

At a recent strategic planning workshop the Council also proposed that a further three roundabouts along Marine Parade be included in the 2015 Long Term Plan to be implemented over the next few years. These roundabouts are yet to be funded.

“The Napier City Council has been working for a number of years both locally and on the wider regional strategic network to reduce the number of heavy vehicles using Marine Parade,” Mr Dalton says.

The Browning Street roundabout follows several other traffic management initiatives already implemented along Marine Parade in order to reduce Port-bound traffic. These include single-laning in each direction and additional signage – as far south as Paki Paki.

“The Council has also agreed to fully fund the construction of an extension to Ford Road which is a pre-requisite to four-laning of Prebensen Drive. We expect this will also assist in attracting trucks off Marine Parade.”

Meanwhile, the south-bound expressway will be further enhanced with the completion of the Whakatu Link and the Pakowhai Rd/ Expressway intersection upgrade, both of which have funding earmarked for their construction subject to successful land negotiations.