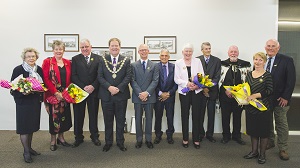 Helping families and young people in need is common to many of the recipients of this year’s Napier Citizens’ Civic Awards.

The ceremony at which they received their awards was held on Monday, 5 September, at the Napier City Council Chambers.

“Our Award recipients do so much for others without expecting anything in return, so it is nice to acknowledge their achievements in this way,” said Napier Mayor Bill Dalton, who presided over the ceremony.

Penny and Mike Madden are both long term Cancer Society of New Zealand volunteers. Penny, a renowned artist and the Napier Pipe Band’s immediate past president, is a Trustee of the HB Breast Cancer Trust. Mike helps in various ways, including being an on-call driver for cancer patients needing to travel to Palmerston North for treatment.

He is also a Trustee of the Little Elms Charitable Trust, which runs a facility adjoining Hawke’s Bay Hospital providing accommodation and support to children and families receiving medical care.

A Napier Community Patrol member since 2009, Mike carries out extra duties as a “responsible person” that police can call on to sit in on youth interviews when the young person has no other appropriate adult available to support them.

Together they have also been Art Deco volunteer walk guides since 2002.

Erica Toomey has worked as a court aide, helping countless families and individuals through the court process, and was part of a group of Napier residents instrumental in Napier retaining primary care facilities in the form of the Wellesley Rd Medical Centre.

She is also a long serving Trustee of the Hawke’s Bay Addiction Centre Trust, which owns the Springhill Residential Addiction Treatment Facility.

Anne Reese has been part of St John’s leadership team for the Tamatea Youth Division and Division Manager until 2005, when she became the Area Chairperson for the Hawke’s Bay Area of St John.

She has been involved with training St John regional teams competing at a national level and has a huge passion for youth activities.

Harry, who received a Queen’s Service Medal in 2012, has coached keen junior cricketers for 36 years and still runs regular practices and matches for Napier Tech Cricket Club’s under 10s.

Tony Wilson has been an active supporter of the Maraenui community since the 1970s.

He was involved in the establishment of the Maraenui Community Council, and more recently instigated the “Friends of Anderson Park” group. He has also been a Trustee and active member of the Maraetotara Tree Trust.

John Cocking played a leading role in developing the Art Deco Festival in its early years.

His Art Deco character Bertie has become world renowned as an icon of Napier, and he has also shown great talent as a playwright and actor.

Christine Packer has been an enthusiastic Art Deco volunteer for 22 years, including stints as a walk guide, shop and visitor centre assistant, and as a volunteer trainer. She is also involved with the committee that coordinates the Earthquake Survivors afternoon tea event.

Her other voluntary work includes being an assistant reader for young children at Saint Patricks’ School, as a tour guide at MTG Hawke’s Bay, and for the French Association.