Aquarium studies a hit with US students 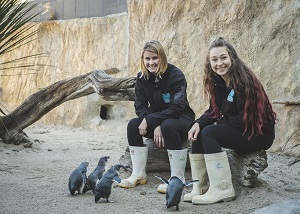 Two United States university students who have just spent a month at the National Aquarium of New Zealand say the experience has been world-class and they would encourage other students to do the same.

The pair, whose study was arranged through Massey University and USAC (University Studies Abroad Consortium), are part of a larger group of students at the end of a six-week Study Abroad programme.

Their first two weeks were spent studying “on the road”, starting in Queenstown, and including stints on the West Coast and in Taupo, before arriving in Napier where they have lived for the past four weeks. Working with penguins, terrapins and kiwi has been the coolest part of her experience, says Kyanna.

“The staff at the National Aquarium are not afraid to let us join in - I’ve learned a lot by being here.”

She would recommend Napier as a great place to other students, and hopes it will help her achieve one of her current goals, an internship at the US National Aquarium in Baltimore.

For Haley Mae, who is working towards becoming a veterinarian, even though it’s become clear through her Napier experience that “fifty per cent of working with animals is cleaning up after them”, it’s helped clarify her options.

“To have this exciting hands-on experience has just reinforced my belief that I want to work with animals.”

She hopes one day to return and spend a few weeks travelling the country.

The Aquarium has hosted students from throughout New Zealand and around the world for many years, says Manager Rob Yarrall, spending anywhere from a few weeks to a few months at the facility.

“They bring a fresh outlook to what we’re doing, but of course the main reason they come here is to learn from us. They gain an insight into how an aquarium works and gain a much fuller picture of the New Zealand environment in general.”

Following an intensive audit process the facility recently achieved accreditation under the ZAA (Zoo Aquarium Association of Australia and New Zealand) Accreditation Programme, the first aquarium in New Zealand to receive this recognition.

This accreditation is only awarded to zoos and aquariums that can demonstrate the highest of standards, and commitment to, animal welfare.