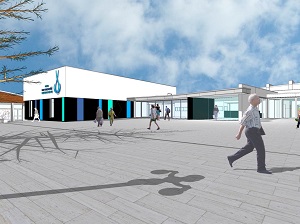 With the planned relocation of the war memorial feature formerly housed in the Marine Parade facility to Memorial Square, the name was no longer considered relevant. The Napier and Taradale RSAs were consulted on the move and the name change, and supported both.

The Napier Conference Centre is currently closed for earthquake strengthening, extensions and refurbishment, and is due to reopen early in 2017.

“We’ve spoken to possible clients at trade shows, for example, who have imagined the facility to be similar to their league clubs or services club rooms.”

The war memorial feature and several other components of the original design were removed due to budget constraints.

“In the meantime, the memorial flame remains lit and is being housed on Council property until it can be reinstalled. It was really important to the Taradale and Napier RSAs that the flame was never extinguished – and we’re very happy to accommodate that request and nurture this special flame,” Ms Fraser says.

“I want to see the flame and the names of our brave soldiers in a prominent place, somewhere where people congregate during Anzac Day and the like – somewhere that has meaning, gravitas, and is within reach of the RSA also.”

The newly refurbished conference centre will provide a state-of-the-art conferencing facility for Hawke’s Bay. The closure period had not affected future bookings for the facility, with staff continuing to take bookings for next year and through to 2018.

As part of the upgrade, the current ballroom area will be extended, which will increase capacity for dining while still retaining a curved form and panoramic views across Hawke Bay.  Additional space added to the foyer allows for an improved meet and greet area for guests as well as a better flow between key meeting rooms and the new exhibition hall next to Ocean Spa.  The hall will provide a much larger trade exhibitor space, something which had been mentioned by regular and potential clients as a key factor in their decision whether to book the facility.

The design has been led by Napier based Citrus Studio Architecture, in association with Graham Weaver Architecture, overseen by Council Design Manager John Wright who is managing the project.