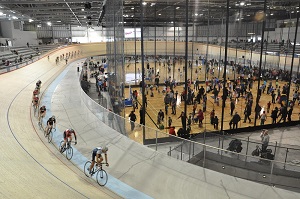 Mayor Bill Dalton has announced that a decision on whether to progress a proposed new sporting hub to be housed adjacent to the Pettigrew.Green Arena will not be made by current Council. He says this decision comes as a direct result of compelling and ongoing opportunities emerging from the work on the Detailed Business Case currently being prepared by the Council project team.

The Mayor says he took a pragmatic approach when considering whether the Detailed Business Case on the proposed Multi-Use Sports Facility would be presented to Council as planned on 29 June, or delayed until after the local body elections this October.

The Detailed Business Case process has revealed a number of exciting developments, including revenue generation opportunities, Mayor Dalton says, and he believes the project team needs time to fully investigate and consider those leads. He also announced that the completed Detailed Business Case is to be reviewed by Sport New Zealand and the project steering group before being presented to the new Council after their induction in November.

“There were a number of factors to analyse, including the Local Government New Zealand convention that, in the interests of objectivity and fairness, major decisions such as this one should not be considered during the three-month pre-election period," Mayor Dalton says.

"This was the only sensible decision. We want time to engage all the stakeholders, offer them the ability to give honest feedback and learn more about what opportunities a facility such as this might deliver.”

Previously referred to as the “multi use velodrome”, the project is now being called the Multi-Use Sports Facility by Council staff, says Mayor Dalton.

“There is unprecedented demand for indoor court space in this region with codes such as netball, basketball, volleyball and futsal crying out for a facility at which to compete at all levels. Although cycling is still very much a part of the mix at the proposed site, it no longer seemed accurate to refer to it as the velodrome. Hawke’s Bay Regional Sports Park will have their elite sporting facility and outdoor space, and if it goes ahead, we will have an outstanding complementary indoor sporting hub here in Napier.”

Drawings of the proposed new facility adjacent to PGA are almost complete and will be made available to the public next week. The Detailed Business Case will be published after its presentation to the incoming Council. Further information on the decision to delay the Council decision is available online at www.napier.govt.nz

“It seems appropriate that the Council making this important decision come November will be the Council that sees any development through to fruition,” concludes Mayor Dalton.