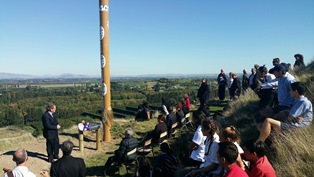 A celebration of the completion of Te Ara o Nga Tipuna (Pathways of our Ancestors) at Otatara Pa on Thursay, 14 April, also doubled as a launch of a new addition to the Rotary Pathway network.

The story of Otatara Pa, depicted by the Turauwha Pou and accompanying story board, is the final instalment of a partnership project between Ngati Paarau and Napier City Council.

While the first four pou in Te Ara o Nga Tipuna were installed in 2012, the project actually grew from a 2009 survey of residents which identified safety concerns in several of Taradale’s parks and reserves. Robyn Smith, Safer Community Coordinator at the time, came up with the idea of creating a cultural trail, something to encourage more people to use the parks, as people tended to feel safer if more people were around.

The Rotary Pathways Trust approached Ngati Paarau to seek agreement to extend the pathways network through Otatara Pa, connecting up to the Western Hills sections. Construction is due to get underway at the end of April.

Mrs Arnott said without a generous bequest given by Basil McCoward, in honour of his late wife Margaret, this particular Rotary project would have taken much longer to start.

“This is going to benefit both projects, by allowing residents and visitors easier access to this amazing place, and encouraging people to learn more about our city’s history,” Mrs Arnott says.