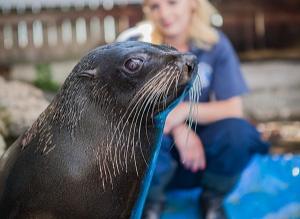 The three remaining Marineland seals will leave Napier for their new homes on Tuesday.

It will be the end of an era for the facility, but Tourism Services Manager Neil Fergus said they are going to fantastic zoos and will be well looked after.

Molly and Mr Bo are going to Sea World on the Gold Coast, and Pania to Melbourne Zoo.

The seals will be transported by Mainfreight from the Marine Parade facility to Hawke’s Bay airport on Tuesday night. They will then be loaded onto a Royal New Zealand Air Force (RNZAF) Hercules bound for Auckland International Airport, where they will continue their journey to Australia on a commercial Air New Zealand flight.

Because commercial flights out of Napier did not have the capacity to carry the seals, the RNZAF kindly agreed to step in.

“We’re aware, however, the Hercules are currently being used in the relief effort in Vanuatu so we’ve made a contingency plan to transport the seals by road if necessary,” Mr Fergus said.

The seals will be accompanied by Marineland’s vet Dr Michael Lintott as well as three keepers.

A full transport management plan was prepared by Council staff and approved by the Ministry of Primary Industries. Mainfreight was selected to co-ordinate the move because of its substantial experience transporting quarantined animals.

The seals have been under quarantine since last year. After arrival in Australia they have to go through an Australian quarantine period of 30 days before they can join the zoo populations.