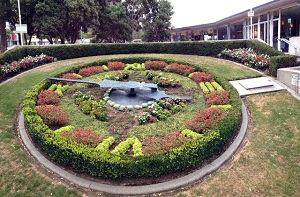 A passionate and lengthy conversation via social media reminiscing about Marine Parade’s floral clock has seen the Napier icon given a new lease of life.

A Facebook conversation between numerous Napier ex-pats sharing their memories of the floral clock in its heyday was spotted late last year by Napier City Council Deputy Mayor, Faye White, who decided to follow it up.

“The online conversation was about how the floral clock on Napier’s Marine Parade had basically ‘lost its lustre’ since its inception in the 1950s,” Ms White says.

“Back then the clock used to feature floral roman numerals and creative shapes and borders. But over the years some of those features diminished.”

After raising the matter with Napier City Council Chief Executive, Wayne Jack, and Council staff, the floral clock was restored to its former glory, complete with roman numerals.

The clock, adjacent to the Napier War Memorial Conference Centre, was donated by Mr and Mrs Hurst in 1955. Mr Hurst was a member and vice-president of the Thirty Thousand Club, which supported Napier over many years by promoting the city as a visitor destination.

“We believe people will continue to take pleasure from this unique Marine Parade feature more than ever and it will form many fond memories for generations to come,” Ms White says.