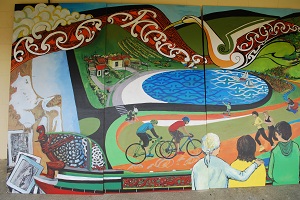 The Tamatea Police Station, in Durham Avenue, is looking vibrant and colourful thanks to the combined efforts of Police, Tamatea High School and Napier City Council.

A mural has been erected on the side of the station depicting the many positive aspects of the Tamatea community.

Measuring 6m wide and 2.4m high, the mural was funded by Napier City Council and designed and painted by Tamatea High School Head of Arts, Graeme Lister, with the help of 12 students.

“It reflects my vision of the positive features of Tamatea, both past and present,” Mr Lister says.

“It shows how the land on which we live arose from the 1931 earthquake and it also links with Maori tribes.”

“When the station opened there was a large blank space on the side of the building,” Mr Burne says. “I got talking to Napier City Council’s Safer Community Coordinator, Robyn Smith, and we decided it was a great opportunity for a community project.”

“Everyone involved in this project has done a fantastic job,” Ms Brosnan says. “It is the start of many new and exciting developments for Tamatea.”

The mural will be unveiled to the public and blessed on Monday, 10 March at 10am. Invitees will be treated to performances from Tamatea High School students along with a story about the mural’s background by Graeme Lister.